I love reading stories about real people - especially when those people use science to solve problems. Here are two women who have made big contributions to our understanding of the world around us. 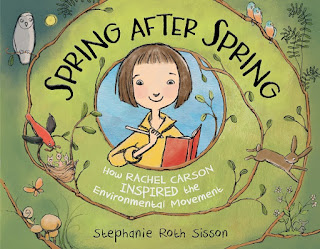 It was dawn when the chorus began.
cheerily! fee bee! jurit jeroo!
Rachel didn't want to miss a note.

Rachel Carson grew up surrounded by the sounds of nature. She paid attention to them season after season. So when spring sounded a little too quiet, she knew something was wrong. What was happening to the birds and insects who filled the air with song?

What I like LOVE about this book: I love that in the first few pages Stephanie R. Sisson has put the calls of birds and other creatures into speech bubbles. It's fun, and helps me hear the symphony of music Rachel heard around her. There's also a vertical illustration, so you have to hold the book a different way - which makes me take a closer look at the illustration and where the story is going.

I like the way Sisson portrays Rachel Carson - as a scientist who studied sea creatures but, when she noticed something was wrong, she used all her science skills to figure out what the problem was. She observed closely. She listened carefully. And she learned as much as she could by reading reports and articles - and then pulled the facts together into a narrative that explained how chemicals used to control insect pests were getting into the food chain and killing birds and other animals. The chemicals were making egg shells so thin that eagle eggs broke in the nest. And then Rachel did a brave thing. She wrote about it. She went to Congress and talked about it. Most of all, she inspired people to take better care of the earth.

I also like that there's back matter. (but frequent readers already knew that!) 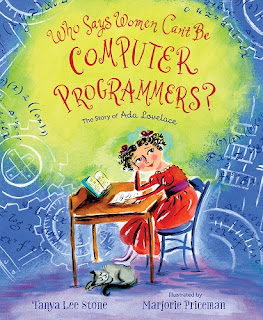 On the outskirts of a lovely village in County Kent, England, down a long driveway lined with lime trees, lived a young girl with a wild and wonderful imagination. As Ada was often left alone, she grew quite good at entertaining herself with interesting ideas.

Ada's mom, Lady Byron, worried about Ada's imagination, so she trained Ada to think like a mathematician. No poetry for her! And when Ada wanted to design a flying machine, Lady Byron gave her more hours of math studies instead of the bird -drawing books that Ada had asked for.

What I like about this book: We get a sneak peek into the life and times of the woman who created computer programming. Bored with high society and not terribly interested in the traditional role assigned to women in the early 1800s Ada preferred to hang out with thinkers - men like Charles Babbage who was inventing a calculating machine.

I love how author Tanya Stone brings in the math and computing power of the Jacquard loom, and how that served as an inspiration for ways to program a calculating machine. And, of course, there's ... Back Matter! Plus, consider this: if Charles Babbage and Ada Lovelace had funding to build their machine, we would have had computers 100 years sooner! Think about how that might have changed history!

Beyond the Books:
Learn More about Rachel Carson. Here's one website that talks about Silent Spring. And drop by Stephanie Sisson's website to learn more about how she wrote the book.

What does your neighborhood sound like in the fall? Go outside and listen. Can you identify all the calls and sounds made by birds, insects, and other animals? Write the sounds down, and then go out again next month and see how the sound scape has changed.

Watch a Jacquard Loom in action. This video was filmed at the Paisley Museum, in Scotland. Check out the punchcards! As early as 1801 people were programming machines to do work.

Write a program (directions) telling someone how to draw a design you have drawn.

My environmentalist heart is very happy to read Spring After Spring. I do like the onomatopoeia in the opening. I am glad to see this scientist's story for young readers.

Sue, I am excited to find these books. I love birds and admire what Rachel Carson accomplished and another Lovelace book interests me (I want to see how it is different from the others already published). I really like both covers! Thanks for highlighting them.

Ada has goten some much needed attention recently, and I am happy to see a book about Rachel too!

I fell in love with the cover! And the title.

One reason I read both is that I have read other children's bios on Rachel and Ada. And I was interested to see how these writers presented their stories.

I was happy to see a new book too. The last book about Rachel that I reviewed was back in 2012.

Two important story about women who made a difference in our world. I always enjoy a new story about Rachael Carson. And, I enjoyed getting to know Ada! Women who are strong role models for girls. Nice selections!

Both books sound great! I especially like the sound of Spring After Spring.