STEM girls never give up! 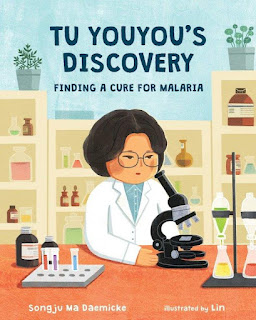 Tu Youyou's Discovery: Finding a Cure for Malaria
by Songju Ma Daemicke; illus. by Lin
‎32 pages; ages 4-9
Albert Whitman & Company, 2021
theme: discovery, biography, women
In 1969, people all across the world were sick.
Malaria was spreading, and was resistant to known treatments. Chloroquine, a Western malaria medicine, wasn’t working, and Tu Youyou wanted to help find a cure. So she studied traditional Chinese medicine books and traveled to provinces where malaria had spread. After hearing about one of the plants used to treat fevers, Youyou dug up a few plants and took them back to her lab. Her team chopped and soaked and boiled and filtered and tested and … it didn’t work.
That didn’t stop them. They tried other plants, and other ways of preparing the medicines. It took nearly 200 tries to find something that worked!
What I like about this book: This story reflects what so much of science is: trial, error, more study, new experiments, and most of all Never Giving Up. I like the back matter, where there is a timeline of Tu Youyou’s life up through 2015 when she received the Nobel Prize in Medicine for her work. And there’s an explanation of the scientific process. 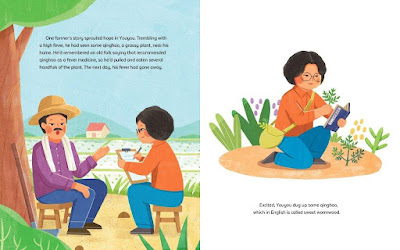 Beyond the Books:
Learn more about Tu Youyou and her search for a malaria cure. You can read about her here and also watch this video.
Be an herbologist! You can grow some medicinal plants in a window box or in your garden. Mint and chamomile are two plants that are used to help settle upset tummies. Remember when Peter Rabbit drank chamomile tea?
Today we're joining Perfect Picture Book Friday, an event where bloggers share great picture books at Susanna Leonard Hill's website. Review copy provided by the author, Songju Ma Daemicke. She’ll join us next month with a guest post. You can visit her website here.
Posted by Sue Heavenrich at 1:00 AM 4 comments:
Email ThisBlogThis!Share to TwitterShare to FacebookShare to Pinterest
Labels: medicine, Perfect Picture Book Friday, plants, women in STEM 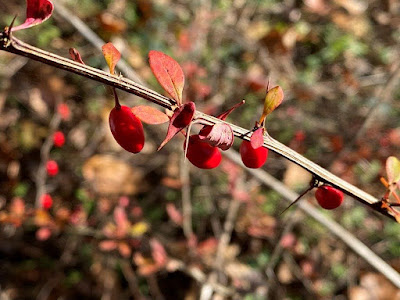 Check out those thorns. Yikes!
This barberry is invading forest understory in our area. It grows long, thin stems bearing single (and very sharp) thorns. A long time ago, people planted Japanese barberries as a "living fence", similar to why they planted multiflora rose. But the plants have escaped their bounds, spread by animals and birds that eat the seeds.
Grouse eat barberries, as do pheasants and cedar waxwings. But they'd prefer other fruits, such as rose hips and winterberries. Apparently they eat barberries only when other foods are scarce. Looking at those long, sharp thorns, I can see why!
This week take a look at berries on the plants that live around you. Just don't snack on any because some berries are poisonous to people.
Posted by Sue Heavenrich at 1:00 AM 1 comment:
Email ThisBlogThis!Share to TwitterShare to FacebookShare to Pinterest
Labels: #1000hoursoutside, explore outdoors, fall, fruit, nature break, seasonal observations

Seeing Creatures from the Inside Out 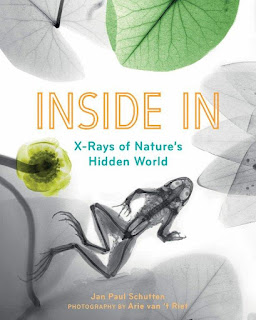 Inside In: X-Rays of Nature's Hidden World
by Jan Paul Schutten (translated by Laura Watkinson); illus. by Arie van 't Riet
136 pages; ages 7-12
Greystone Kids, 2021
X-rays are pretty cool. They allow doctors to see breaks and cracks in bones and teeth, and investigators to determine the authenticity of old paintings. And in the case of this book, they allowed Arie, who worked in a hospital, to use his talent to peek inside insects, frogs, and other animals. Sometimes the animals were found dead at the side of a road. Sometimes they were pets that, after they died, were gifted to him for his study. All of the X-rays used in this book are real, though Arie may have taken some time to arrange the animals before taking the photos.
In case you’ve forgotten how X-rays work, author Jan Paul Schutten provides a succinct reminder. An X-ray is electromagnetic radiation – like the light all around you, but at a higher energy. So X-rays can pass through your skin and soft tissue. But tough material (bones, teeth) block them – and that’s why those hard parts show up in an X-ray photo.
When making an X-ray photo, Arie could choose the amount of energy to give the radiation. And he knew just the right combinations of high and low energies to capture both thin flower petals and the harder bones in the same shot.
What I like about this book:
The photos are amazing. I had never thought about what a bumblebee might look like beneath all that hair. Turns out, they have thready-thin waists, just like wasps! When you look at an X-ray of a butterfly, all those colorful scales are gone from the wing. All that’s left are the veins. And seriously! Arie even took X-ray photos of a caterpillar!
There are photos of frogs, snakes and sliders (turtles), fish, fowl, and a handful of mammals. And at the back there is an explanation of how X-rays were discovered, plus an index if you want to find a photo of a particular creature.

Thanks for dropping by today. On Monday we'll be hanging out at Marvelous Middle Grade Monday with other  bloggers. It's over at Greg Pattridge's blog, Always in the Middle, so hop over to see what other people are reading. Review copy provided by the publisher.
Posted by Sue Heavenrich at 1:00 AM 6 comments:
Email ThisBlogThis!Share to TwitterShare to FacebookShare to Pinterest
Labels: art, middle grade, MMGM, nonfiction 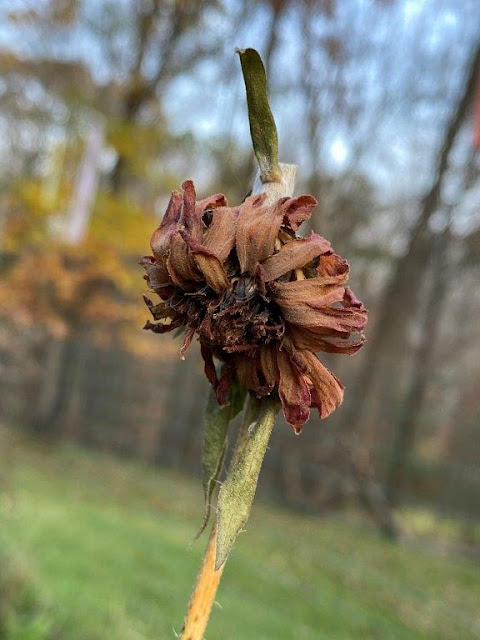 Even after frost, some flowers hold onto their beauty. When you look closely, you can see the details: the hairs on the leaves, the disc flowers in the center, the delicate petals that curl back. You might even find some seeds that you can shake out and let fall to the ground - or collect and plant in your own garden.

As you walk around your neighborhood, local parks, and even your backyard, look for the beauty in frost-killed flowers. Do you notice details you didn't see when they were green and showy?

If you are really lucky - and outside in the early morning - you might even catch frost on the petals!