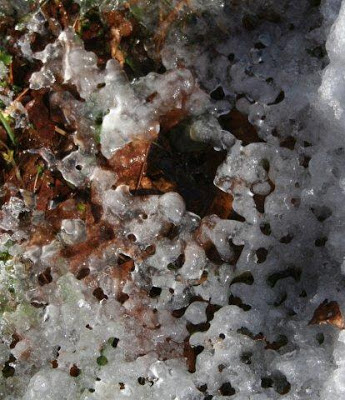 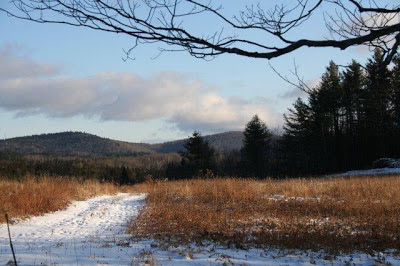 Sounds seem crisper in winter. If you listen, you can hear the hiss of icy pellets hitting the ground, the sharp calls of birds slicing through the air and - if you stand very close and very still - the flir-r-r of bird's wings as chickadees and juncos and nuthatches come in for a landing at the feeder.

What sounds do you hear when you head outside this week? Try making a sound map. All you need is a scrap of paper, a pencil, and a cup of hot cocoa to keep you warm...

Check out more STEM Friday resources here. And if you want help identifying some of those birds making lots of flirry wing noise at the feeder, download a poster of frequent feeder birds here.
Posted by Sue Heavenrich at 12:30 AM 3 comments:
Email ThisBlogThis!Share to TwitterShare to FacebookShare to Pinterest
Labels: hands-on science, sounds, STEM Friday, winter activities 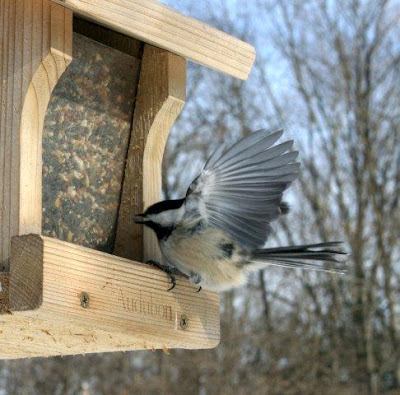 Tufted Titmouse Checks out my Writing... 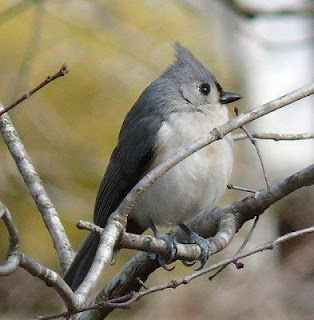 A couple weeks ago I was writing at my desk when I heard a tapping on my window. A Tufted Titmouse, eye to window, was reading over my shoulder. Or maybe he was wondering where the heck the sunflower seeds were.

You see, Tufted Titmice hoard food – just like chickadees. The Titmice raid the feeder, carrying off seeds one-by-one and storing them, usually within 130 feet of the feeder. The Titmice around my house take the seeds over to the forsythia bush … where the juncos and chickadees hang out.

You can find out more about the Tufted Titmouse at All About Birds - where you can also listen to recordings of their songs and calls.

If you've got titmice (and chickadees and nuthatches) and a bunch of sunflower seeds, try to follow them and figure out where they're taking those seeds. If they don't snack on all those seeds, you might find a sunflower growing in a tree next spring!
Head over to STEM Friday for more science resources.
Posted by Sue Heavenrich at 12:30 AM 2 comments:
Email ThisBlogThis!Share to TwitterShare to FacebookShare to Pinterest
Labels: backyard science, birds, STEM Friday 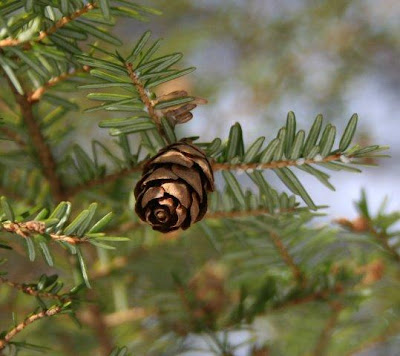 
Last week I wrote about the snow fleas hopping all over my ski tracks. Turns out lots of insects have similar strategies for dealing with winter weather.

Some go dormant, entering a state called “diapause”. That’s a state of dormancy that might look like hibernation but isn’t. It’s used as a way to survive temperature extremes, drought, or other unfavorable conditions. Insects that spend the winter in diapause can withstand a temperatures as low as 94 degrees below zero Fahrenheit (-70 C).

How do they do it? Some have antifreeze compounds that supercool their body fluids and tissues – sort of like ethylene glycol used in antifreeze for cars. Other insects freeze, turning into bugsicles – like the Arctic Woolly Bear caterpillar that Amy Hansen writes about in her book,
Bugs and Bugsicles.

In Bugs and Bugsicles, Hansen shows the diversity of strategies insects use to survive winter. Unlike the grasshopper of Aesop’s Fables fame, many insects begin their winter preparations while the weather is still warm. In late summer Monarch butterflies get ready to fly to Mexico, honeybees cap off their cells full of pollen and nectar, and ants stockpile seeds of all sorts and sizes.

Dragonfly nymphs curl up in the mud. Not only does the mud protect nymphs from cold, but it hides the nymphs from hungry fish. Ladybugs are more gregarious – they snuggle in hidden ladybug clusters until spring returns. And some insects go to sleep or, like the Arctic Woolly Bear, freeze until spring thaw.

Bug antifreeze works because, as the temperature drops, their cells produce glycerol (or other compounds). These compounds prevent water crystals from forming within the cells – and that’s important, because water freezes and any ice crystals would rupture the cells and  kill the insects.

Hansen includes some hands-on investigations for curious bug-ologists- but here’s one you can try. You’ll need 2 ice cube trays, a couple cups, a measuring cup, some sugar and a freezer (or a really cold day).

Mix 1/2 cup of sugar with 1 quart of water. Fill up an ice cube tray with this solution.

Put water in the other ice cube tray. Put both trays in the freezer and check after an hour.

You can read more about insects in winter here - and check out more science resources at STEM Friday! Review copy provided by publisher. 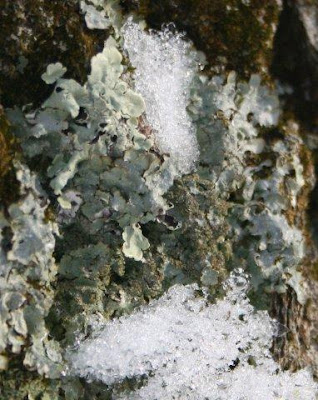 My Snow Has Fleas! 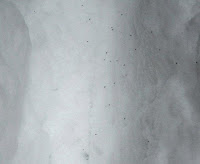 Earlier this week we had so much snow that we just had to strap on our skinny skis and lay some tracks across the hayfields and into the woods. One morning when I headed out on my skis, I found specks of pepper in the tracks – pepper specks that hopped up and down.

It wasn’t pepper – it was a bunch of snow fleas. Snow fleas aren’t really fleas; they’re tiny arthropods called Collembola, or “springtails” and they’re about 1/8 inch (2 mm) long. They’re called “springtails” because they have two tail-like furcula on their back end – thin tails that are tucked up underneath their belly. When the springtail wants to move it releases its spring-loaded tail, which catapults it up into the air. It’s a great way to move, but there’s only one problem: the tiny critters can’t control where they go, so they often land in the same spot or just a few inches away. 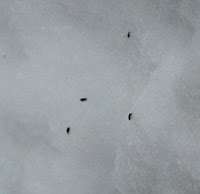 Springtails live in the soil, which right now is a couple feet under the snow. But on warm winter days they climb or hop or catapult their way to the surface and hang out in cross country ski tracks and other places. They’ve got glycine-rich antifreeze protein inside that keeps them from turning into ice crystals.

I found my snow fleas in the woods, but they’re everywhere. So keep your eyes out for tiny flecks on the snow. And when you find some, grab a hand lens and get a good look at them.

You can find out lots more about snow fleas here. And remember to check out more cool science stuff at STEM Friday.
Posted by Sue Heavenrich at 12:30 AM No comments:
Email ThisBlogThis!Share to TwitterShare to FacebookShare to Pinterest
Labels: backyard science, hands-on science, insects, snow fleas, STEM Friday, winter activities 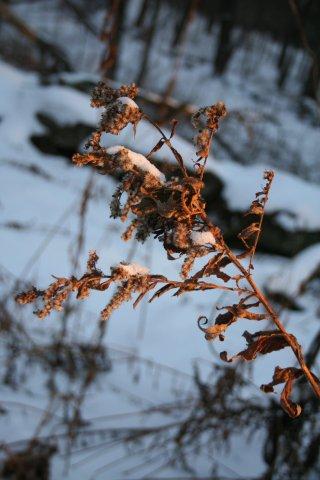