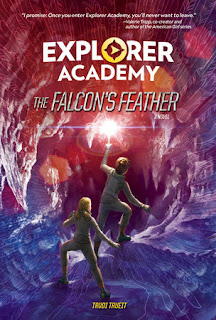 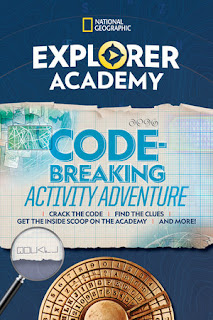 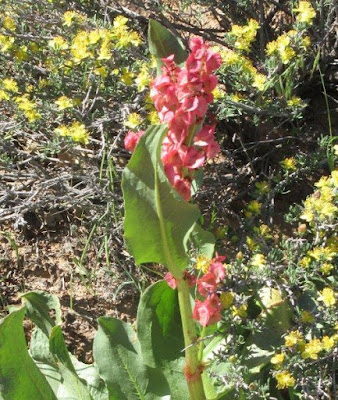 I found this relative of a common garden weed (curly dock) in Arches National Park. Some people call it wild rhubarb, and cook it up. It is also used as a dye plant - as is the more common garden variety.

Today is Summer Solstice – that point in the year where the northern hemisphere is tilted towards the sun. The result: longest day of the year, shortest night of the year.

June is also Orca Awareness Month and, at the end of May, Orca scientists celebrated the birth of a new calf to the J-pod off the coast of British Columbia, Canada. So the perfect time to share this book (that had found a great hibernation space at the bottom of my book basket!).

In the early 1970’s Dr. Mike Bigg, a marine mammal scientist, pioneered a method of photo identification for orcas. He found that the dorsal fin “saddle patch” for each whale was unique, like fingerprint in humans. And that allowed him to follow individual whales and their pods.

Today, Ken Balcomb and other whale researchers use those techniques as they continue the research on resident and transient orcas off the coast of Washington state and southern Canada. Ken is the founder  and principal investigator for the Center for Whale Research at Friday Harbor. From May through October, he and other scientists keep track of who’s swimming with whom.

Despite their name of “killer whales”, over his 40 years of observing Ken’s never seen any of his whales kill anything other than the fish they eat. And they eat a lot – about 5% of their body weight in fish each day. Unfortunately, a decreasing fish population creates problems for the whales. They have to travel greater distances to find food, and that means less time for socializing, playing, and resting.


There are a lot of unanswered questions, but it’s not too late to make a difference. Check out the Orca Network and Whale Research Center for more information.

Today we're joining other book bloggers over at STEM Friday, where you can discover other cool STEM books. Review copy from the publisher.

Posted by Sue Heavenrich at 12:30 AM 2 comments:
Email ThisBlogThis!Share to TwitterShare to FacebookShare to Pinterest
Labels: ocean animals, scientists-in-the-field, whales

Some desert flowers look so dainty that you wonder how they can survive. Here are two more from Arches National Park, UT. 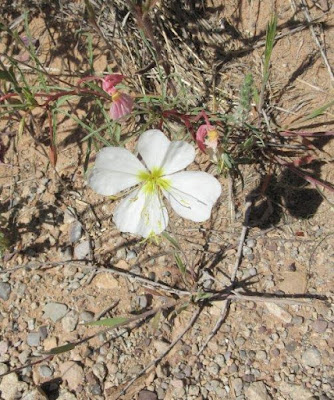 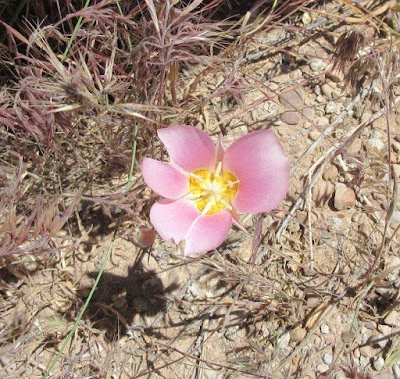 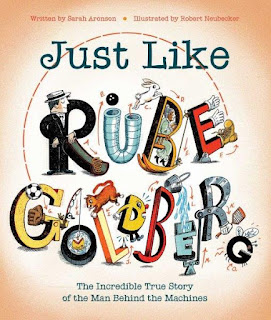 Just Like Rube Goldberg: The Incredible True Story of the Man Behind the Machines
by Sarah Aronson; illus. by Robert Neubecker
48 pages; ages 3 - 8
Beach Lane Books, 2019

Question: How do you become a successful, award-winning artist and famous inventor without ever inventing anything at all?

If your name is Reuben Garrett Lucius Goldberg, you do it in very circuitous manner. First, you get a degree in engineering and work for a city department of water and sewers. Then you quit and get a job cleaning the newspaper office. And in your free time you draw until the editor finally gives you a job. Then an earthquake crumbles the city around you, so you move across the country and do it again. And somewhere along the way you start inventing “screwball contraptions” – complex machines that use chain reactions to perform a simple task.

What I like love about this book: I have heard about Rube Goldberg my entire life, but it wasn’t until I read this book that I learned he was the son of Jewish immigrants. And his father didn’t want him to go into art. I knew Rube had designed all manner of silly machines that could do everything from exterminating a mosquito to hailing a street car. But I hadn’t put his cartooning into context: he began inventing his cartoon contraptions during the age of invention. 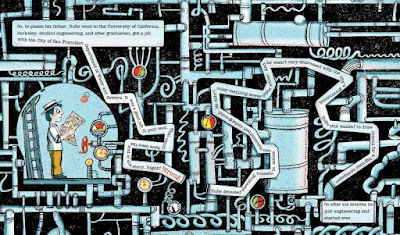 I like Robert Neubecker’s art. This spread in particular – a maze of pipes through which the text of the story runs. And I love that the end pages contain drawings of Rube Goldberg’s machines. I also like the back matter – more information about Rube and a short list of selected sources.

You can learn more about Rube Goldberg here

You may have seen a Rube Goldberg machine featured in a TV ad, like this one.

Try your hand at designing and building your own Rube Goldberg machine. Here are some ideas to get started:


You can find some helpful hints on making Rube Goldberg machines here.

Next Wednesday author Sarah Aronson will be chatting with me over at the GROG Blog. Come on over and join us! 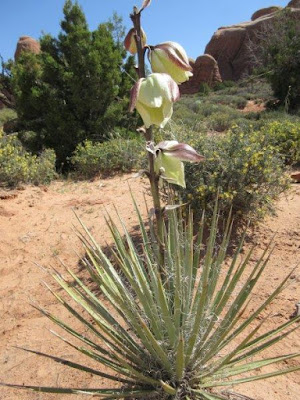 Yucca is one cool plant. Look at those creamy white flowers, and those sharp, pointy leaves. The leaves look like they're fraying on the edge... let's look closer. 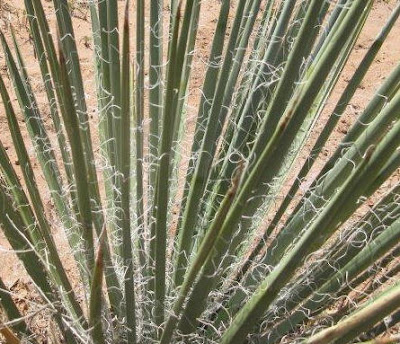 Turns out those fibers are useful. But first you need to soak the leaves, pound them with a wooden mallet, and rinse away the pulp. The remaining fibers can be twisted into threads. Yucca fibers and threads have been used in making cordage, sandals, mats, clothing, nets, and baskets. You can learn more about natural fibers here.

In my garden there are milkweed plants that produce wonderful fibers. What plants do you have in your neighborhood that could be used for fiber?
Posted by Sue Heavenrich at 12:30 AM No comments:
Email ThisBlogThis!Share to TwitterShare to FacebookShare to Pinterest
Labels: deserts, flowers, plants, Wednesday Explorers Club

While I was walking around Dead Horse Point a couple weeks ago, a fat lizard scurried across the trail and under a shrub. That reminded me that I had a cool lizard book to share. So today's themes are animals, reptiles, and nature 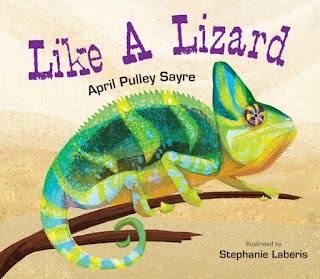 What about pushups? Or dashing across water like a lizard? If you could live like a lizard, you’d have lots of choices about how to behave. That’s because there are about 6300 kinds of lizards living on Earth, and each of them is adapted to its habitat in certain ways. April Pulley Sayre presents an inside look at how 28 lizards make their living.

What I like about this book: I love that each page asks the reader to compare their life with that of a lizard – and each page features specific lizards doing their thing. Like frill-necked lizards showing off their collars, and geckos climbing twigs. I like the bright and realistic illustrations – I never knew about some of these lizards! Plus the cover image: who can resist a face like that? And I like the back matter where lizard secrets are revealed. Most of all, I like April’s message that lizards and people can live together in harmony. 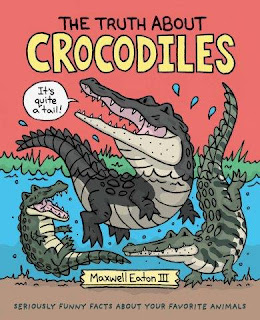 These are crocodilians. Some people call all of them crocodiles. We’ll call them crocs.

Using text, cartoons, sidebars, and dialog balloons, Maxwell Eaton III introduces readers to the croc families. They include crocodiles, alligators and caimans, and the gharial. Just like lizards these reptiles have armored skin, four legs, breathe air using lungs, and are ectothermic (what people call “cold-blooded”). Mostly they’re at home in the water.

What I like about this book: the crocodile jokes, the breezy illustrations, the birthday girl (who has to deal with all these sassy crocs), and the handy list of things to avoid when traveling in croc country. Hint: don’t camp next to the water! And even though there are plenty of info-packed sidebars throughout the book, there is back matter – a “croc-o-file” of fast facts, a map, and some resources for further research.

Find out more about reptiles here and here.

Go on a reptile field trip. Maybe you live in an area where geckos or horned lizards call home. If not, then check out the reptile house at a local zoo or pet store. Look for photos of different kinds of lizards online - here's one source.

Check out the picture book about crocodiles over at Sally’sBookshelf. 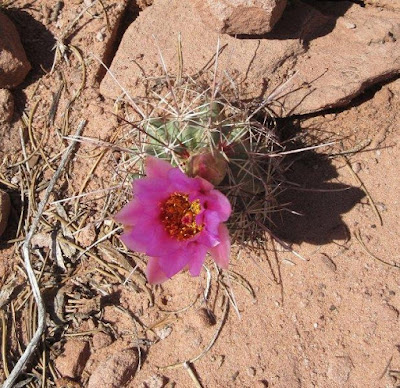 This month we're going on a field trip to the Canyonlands area of Utah. While walking around Dead Horse Point in May, I found cacti beginning to bloom. Such dainty blooms atop prickly pads! But those spines are important adaptations. Learn more about cactus adaptations from this post about cactus spines (U of TX).
Posted by Sue Heavenrich at 12:30 AM 1 comment:
Email ThisBlogThis!Share to TwitterShare to FacebookShare to Pinterest
Labels: adaptation, deserts, flowers, plants, Wednesday Explorers Club
Newer Posts Older Posts Home
Subscribe to: Posts (Atom)