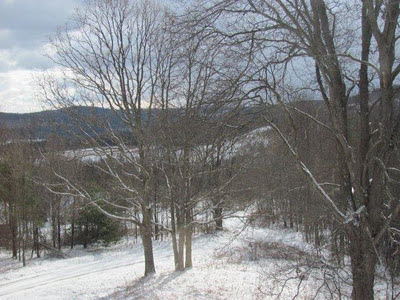 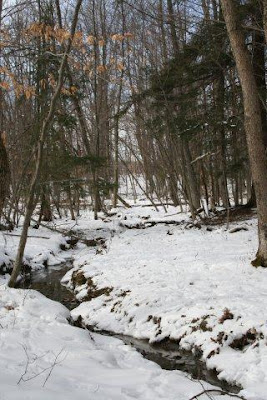 Winter is a perfect time to look at trees because you can see their “skeletons” without all those pesky leaves to distract you. Now you can take a closer look at the patterns in bark and how branches and twigs attach. And you can take a closer look at the buds on the sides and ends of twigs.
On some trees the twigs (and buds) are opposite each other, paired up. Maples, ash, dogwoods and buckeyes have opposite branching – and opposite buds.
Other trees have alternate branching. So the buds alternate along the twig.
What sort of tree buds do you find in your backyard?
If you’re looking for a good book to read about winter trees, go here.
The best field guide I’ve found for this season is the Winter Tree Finder by May T. Watts and Tom Watts.
Posted by Sue Heavenrich at 7:17 AM No comments:
Email ThisBlogThis!Share to TwitterShare to FacebookShare to Pinterest
Labels: winter activities, winter trees


what a difference a day makes...
On Monday morning we were in the midst of winter and then it started to rain.


Posted by Sue Heavenrich at 8:24 AM No comments:
Email ThisBlogThis!Share to TwitterShare to FacebookShare to Pinterest
Labels: seasonal observations, Tuesday view

Another Good Book: Star of the Sea

Star of the Sea: A day in the life of a starfish
Written by Janet Halfmann; illus. by Joan Paley
32 pages, for ages 5-9
Henry Holt/Christy Ottaviano Books, 2011 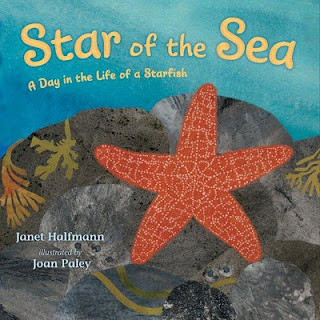 I’ve been carrying this book with me for three months and can’t put it down. I love the bold colors and textures of the collage artwork. I love that the main character is a starfish – a lowly critter that moves about on tube feet and extrudes its stomach into clams. What I love best is that the narrative arc of the book follows the rhythm of the tides. Which makes sense, because tides dictate the daily life of a starfish.

“As the high tide rushes in, Sea Star crawls onto the shore to hunt,” Janet Halfmann writes. We learn the secrets of how tube feet work, how starfish moves by twisting her body like a pretzel. Life is different when your mouth is on your underside, Halfmann points out.

When Sea Star reaches the mussel bed she “hunches over a big mussel and grips its two shells with her strong feet.” Sea Star pulls on the shells to open them; mussel pulls on the shells to keep them closed. It’s a real tug-of-war, but Sea Star gets her supper. Unfortunately the tide has turned and she is stranded on shore – easy prey for a hungry gull. She manages to escape, losing one of her arms (rays) in the process… and makes it back home when the tide returns.

Halfmann lives in Wisconsin, so how did she get inspired to write about sea stars?

“I have written other stories about the sea and its creatures and have always been fascinated by sea stars,” she says. “I think it’s because of their star shape and their many colors and designs. Somehow, they seem almost magical!”

When Halfmann started researching sea stars for her story, she found them to be more amazing than she’d imagined. She learned that sea stars can hunt only underwater – because they use hundreds of tiny, water-powered feet to move.

“When hunting on the shore, they have to wait till the tide comes in,” Halfmann says. “I also was surprised to learn that the sea star’s mouth is on its underside.”

Ironically, when she wrote the story Halfmann hadn’t yet met a sea star up-close-and-personal. So she relied on accounts of scientists. Since writing the story, however, she’s made the acquaintance of an ochre sea star – the star of her story – at the Monterey Bay Aquarium in California.

“I made sure to investigate every part,” Halfmann said, “its tube feet, its mouth, its spines, the small hole where water enters on its top side. I felt like I and this sea star shared a special bond.” Now she doesn’t have to travel so far to visit – there’s an aquarium in her hometown of Milwaukee.

In her book, Halfmann has a hungry gull picking up Sea Star for supper. Otters and some fish eat sea stars, she says. But on the shore, the sea star is top predator.

“Other seashore animals are deathly afraid of the sea star,” Halfmann said. “They try to get away fast when they sense a sea star nearby.”

I’m not the only one who loves this book; this fall the National Science Teachers Association named Star of the Sea a 2012 OutstandingScience Trade Book. This review is part of STEM Friday, a round-up of reviews of children's books on science, technology, engineering and math. Today's host is Laurie Thompson. 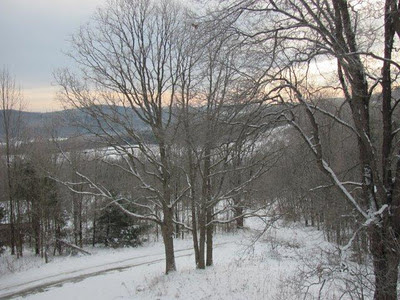 gray squirrels leap across the road
from oak to maple where the branches almost
meet ... but not quite.
tricky landings, sometimes they
leave surprised squirrel tracks in the snow
below.
Posted by Sue Heavenrich at 7:56 AM 1 comment:
Email ThisBlogThis!Share to TwitterShare to FacebookShare to Pinterest
Labels: seasonal observations, Tuesday view

Adopt a Twig for Winter 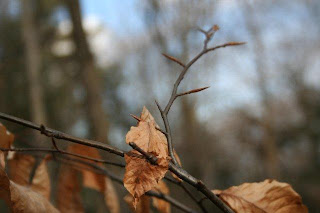 Trees may look dead during the winter – but they’re not. The leaves may be gone, but there are plenty of buds on the twigs. And each of those weatherproof buds holds next season’s growth.
Take a look for yourself. Find a tree with fat buds on the ends of its branches. Now carefully peel open one of the buds. Inside you’ll see tiny leaves and stems twisted and folded up, waiting to grow once the weather grows warmer.
Adopt a twig and watch the amazing changes that happen as spring returns. Tie a ribbon around your twig so you can find it again. Then take a photo – or draw a sketch – of your bud.
Check back in a month and see how it’s faring. Take another photo, sketch another bud portrait and make sure to write down any changes you see. Does it get bigger? What happens in the spring? Does it turn into a leaf or a flower? Follow it through the fall.
Posted by Sue Heavenrich at 8:50 AM 3 comments:
Email ThisBlogThis!Share to TwitterShare to FacebookShare to Pinterest
Labels: winter activities, winter trees 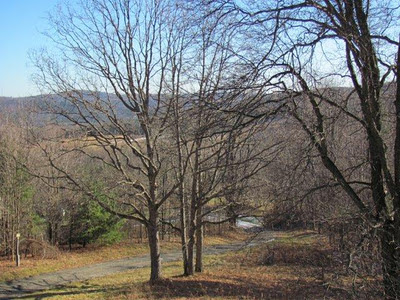 Any other year we'd have the skis out on the back porch...
Posted by Sue Heavenrich at 8:12 AM No comments:
Email ThisBlogThis!Share to TwitterShare to FacebookShare to Pinterest
Labels: seasonal observations, Tuesday view 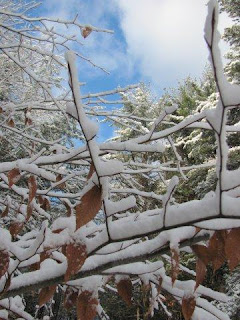 Winter is a quiet season. The birds that woke us up all summer have flown south; there are no crickets and frogs singing. But even in this hushed stillness there is activity. So find a spot where you can sit, and close your eyes and listen. As you tune in to the different sounds of winter you might hear beech leaves flapping, a chickadee calling, a squirrel scolding you from the trees above.
Try making a sound map in your journal. Note what you hear in front of you, to the sides, behind you. Sketch the arc of a jet passing overhead, the traffic noises, a dog down the street.
Posted by Sue Heavenrich at 8:40 AM No comments:
Email ThisBlogThis!Share to TwitterShare to FacebookShare to Pinterest
Labels: sounds, winter activities 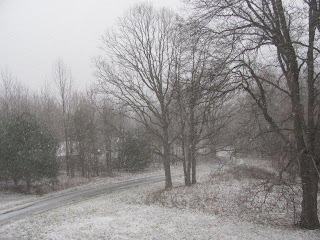 one downy woodpecker braves the falling snow
to get first dibs at the suet...
are all the others hiding in the pines
sipping tea and playing euchre?
Posted by Sue Heavenrich at 8:34 AM No comments:
Email ThisBlogThis!Share to TwitterShare to FacebookShare to Pinterest
Labels: seasonal observations, Tuesday view
Newer Posts Older Posts Home
Subscribe to: Posts (Atom)
Powered by