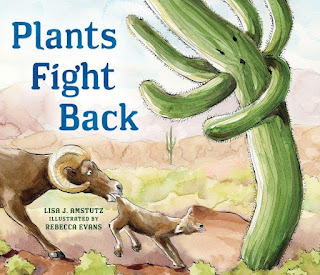 Plants Fight Back
by Lisa Amstutz; illus. by Rebecca Evans
32 pages; ages 4-8
Dawn Publications, 2020
theme: plants, nature, rhyme
It’s tough being rooted when danger is near. So what do plants do?
When you’re threatened by danger, you can run away. Plants can’t. But they can fight back. Some use needles and prickers. Some use poison. Some exude sticky stuff to trap intruders. And some use disguises so hungry herbivores don’t recognize them. And, like you, some plants call for help!
What I like about this book: I love the attitude that author Lisa Amstutz imbues within these plants. They are feisty! They are sneaky! They are determined to survive! Each spread introduces a plant defense in verse, accompanied by a sidebar that gives more context. I particularly love the scene with cotton plants calling in the “air force”. When attacked by caterpillars, cotton – and other plants – release a mix of chemicals into the air. Those chemicals signal to wasps that “food for larvae” is available. The wasps lay their eggs inside caterpillars and, when the wasp larvae hatch they eat the caterpillars from the inside out. Gross but cool, right? 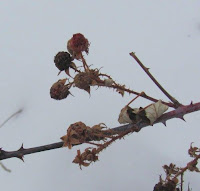 What sort of defenses do the plants around your house use? If you can visit a plant conservatory, look for plants with prickers and thorns, thick milky sap, spicy fruits (like a hot pepper), or other defenses.
Plants calling on insects for help sounds pretty weird. You can read more about parasitic wasps, and see a video, here.
Design a plant that can “fight back.” What superpower will your plant have? How will it work? Draw a picture of make a model of your plant.
Lisa Amstutz is a member of #STEAMTeambooks. You can find out more about her at her website.
Today we're joining Perfect Picture Book Friday, an event where bloggers share great picture books at Susanna Leonard Hill's website. Review copy provided by the publisher.
Posted by Sue Heavenrich at 12:30 AM 1 comment:
Email ThisBlogThis!Share to TwitterShare to FacebookShare to Pinterest
Labels: #STEAMTeamBooks, adaptation, animals, Perfect Picture Book Friday, plants 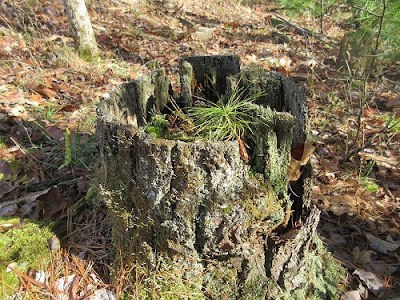 The other day we were walking in the woods and came upon this tiny pine growing out of an old pine stump. Nothing in this forest is wasted. A tree feeds and houses a diversity of living things, even in its demise.

This fall and winter, explore the places close to you: your backyard, the neighborhood park, flower pots and tubs on the balcony. Look for signs of new life growing out of old. 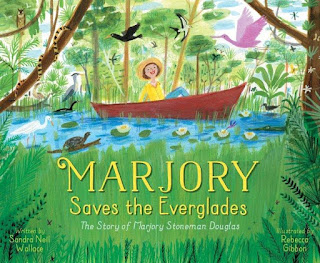 Marjory Saves the Everglades: The Story of Marjory Stoneman Douglas
by Sandra Neil Wallace; illus. by Rebecca Gibbon
56 pages; ages 4-8
Simon & Schuster/Paula Wiseman Books, 2020
theme: environment, biography, STEM
Before airplanes and automobiles, a girl in gold-rimmed glasses sailed on a steamboat to Florida.
I don’t know about you, but after reading that first line I really want to know who she is and why she’s heading to Florida. And whether her parents know about this.
Whew! Yes, parents are there. And young Marjory, having bitten into sweet oranges, has developed a taste for the southern state. But she and her mom end up living in the north, where Marjory explores the outdoors and, eventually, college. And later, returns to Florida where she reunites with her father and writes for his newspaper, the Miami Herald.
Marjory wrote about how women should get the vote. And later, when developers began digging and draining the Everglades, she began writing about the environment. After a trip to the Everglades aboard a houseboat, she lobbied the National Park Service to include the Everglades as a park. She also began asking questions: were the Everglades really a swamp? She donned boots, grabbed a trowel, and began digging… to discover that what looked like a swamp was really a river. Slow-moving, but a river. Putting pen to paper, she began to write – and fight – to save the Everglades.

What I like about this book: This is the perfect book for kids who wonder if their voice will count. Marjory Stoneman Douglas may have been only one person, but she made a difference. I like that she shows how a person, no matter what their age, can learn new things, and use their skills to save what they love. There is also back matter: an author’s note, a brief introduction to Everglades species, resources, and tips for protecting the environment. The most important tip: NEVER GIVE UP!
Beyond the Books:
Where is your favorite place in nature? Take a few minutes to write about why you like it. If it’s close by, go visit and take some photos. Write about how this place is important to the local plants, wildlife, and people.
Take a virtual tour of the Everglades. You can find one here at the National Park site. 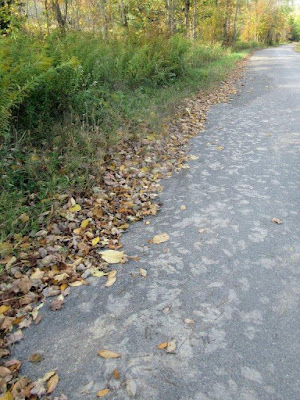 A few weeks ago - well, actually, quite a few weeks ago - the wind and rain whipped leaves from the trees. Heavy and wet, the leaves fell to the road, landing in mud. The next day things dried up and the wind blew the now-dry leaves into the tall grasses. All that was left were the muddy leaf prints.

This week, discover the stories that plants and animals in your neighborhood leave behind. Maybe it's a pile of hickory nut husks, scat, slime trails, or tracks.

A Guy With a Real Superpower! 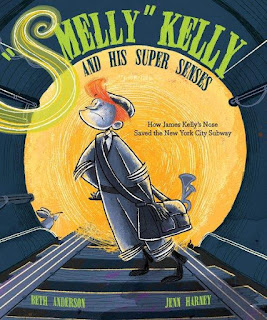 "Smelly" Kelly and His Super Senses: How James Kelly's Nose Saved the New York City Subway
by Beth Anderson; illus. by Jenn Harney
40 pages; ages 7-10
Calkins Creek, 2020
theme: biography, engineering, superpowers
James Kelly smelled everything.
Even circus elephants a mile away. But what good was the superpower of super-smelling? And how would it lead to a decent job? When he went to New York City he discovered a need for his nose: sniffing out leaks in the subway system. Leaking water could cause a cave in. Leaking gas could cause an explosion. Soon, James had a new name: Smelly Kelly.
He did more than just sniff for stinks. He studied up on chemistry, finding a powder that could help him identify leaky pipes. He invented gadgets to help him listen through walls for the sounds of drip, drip, dripping.

What I like about this book: I’d never heard of Smelly Kelly, so it was fun to read about someone who used his superpowers in a different way. I like the fun – and funny – way Beth Anderson tells his story. And I love the loads of back matter!
Beyond the Books:
Do you have a superpower? What is it? And how can you use it for the good of your family and neighbors?
Smelly Kelly makes a stethoscope so he can listen to leaks in walls. Here’s how you can make your own stethoscope.

You can read about James Kelly and the underground world he inhabited here.

When my kids were young, we set up a bird feeder and tacked the bird identification poster on the wall. We loaded a steel garbage can with bird seed and suet packets and made sure there was a field guide and binoculars on the windowsill. Then we signed up for Feeder Watch, a fun citizen science project through Cornell Lab of Ornithology.

Back then, we filled out data sheets by hand and mailed them in at the end of the season. On days we weren't counting birds we came up with other things to study. Like how many kinds of birds made up the "feeder flock." And whether chickadees perching on the clothesline observed "social distance". And various ways to frustrate squirrels intent on raiding the sunflower seeds.

The cool thing was that, by observing birds at the feeder we were providing scientists with data that could lead to a scientific discovery.

This year, Feeder Watch begins November 14. If you are new (and even if you're not) there's a webinar on Thursday, November 19 to help you get started: Winter Bird Feeding 101 with Project FeederWatch. Dr. Emma Greig and Holly Grant will answer questions about feeders, foods, and the birds that frequent our yards. You can sign up here.

Check out earlier posts for birdy activities here and here.

A Shoe for an Elephant 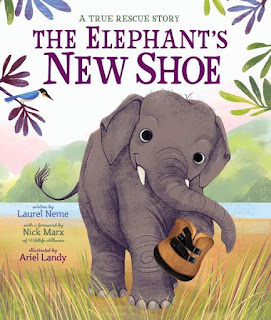 The Elephant's New Shoe
by Laurel Neme; illus. by Ariel Landy
40 pages; ages 4-6
Orchard Books (Scholastic), 2020
theme: animal rescue, elephants, engineering
Animal rescuer Nick Marx peered at the injured elephant.
It was a young male, orphaned and in bad shape. A wire snare had cut off his foot, which meant he couldn’t keep up with the herd. So Nick did the reasonable thing: he camped by the elephant, fed him bananas, and gained his trust. Then he moved him to a rescue center.
Nick introduced the young male, called Chhouk, to another elephant. But when she wandered, Chhouk couldn’t keep pace. Could the rescuers make a foot for Chhouk?
What I like about this book: I like the way medics work on the problem of building a huge shoe that can take hundreds of pounds. I like how Laurel shows that nothing is easy; it took a few tires to eventually create a prosthetic foot that allowed the young elephant freedom of movement. There is great back matter, with photos and more information about elephants. And Nick, the wildlife rescuer, introduces the book noting that elephants “may look a little different, but they are people, too!”
Beyond the Books:

Chhouk is an Asian elephant, an endangered species. You can find out more about them here.

Watch a video about Chhouk and his prosthetic foot here. And check out the posts about Chhouk at the Wildlife Alliance page here.

Chhouk isn’t the only animal to receive a prosthetic. Birds, cats, dogs, horses – many animals are helped by prosthetic limbs or beak extensions, or even a pair of wheels. Find out more here.
Laurel Neme is a member of #STEAMTeam2020. You can find out more about her at her website. 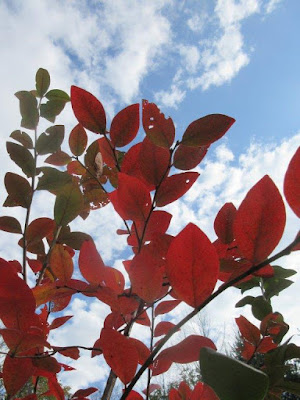 if I were an ant
beneath a blueberry bush
what would I see?
Posted by Sue Heavenrich at 12:30 AM 1 comment:
Email ThisBlogThis!Share to TwitterShare to FacebookShare to Pinterest
Labels: #1000hoursoutside, colors, explore outdoors, fall, hands-on, nature break, seasonal observations
Newer Posts Older Posts Home
Subscribe to: Posts (Atom)
Powered by