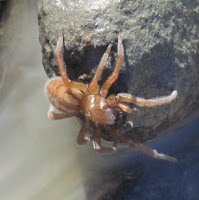 Last week I reviewed books about predators and prey, so this week we're taking a break from books to study local predators. One predator that you might find - even in the winter - is a spider.

Spiders aren't very active this time of year - at least in the northern part of the US where the weather is cold and snowy. Nope. Most of 'em are snugly ensconced beneath layers of leaves, or hanging out in the northeast corner of my bathroom (because it's warm and humid and there's usually an errant fungus gnat cruising about).

If you can't find any spiders around your house, you can always look online. Check out spiders with Bill Nye. 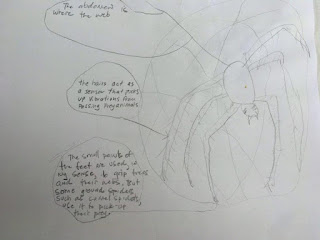 In the next town over, six-year-old Zuri has been busy drawing bugs. Some are imaginative multi-legged mini-monsters, and others resemble sketches you might find in any field journal. But the other day he emailed me a spider - OK, a drawing of a spider, complete with annotations.

Zuri likes drawing spiders because there are so many species and he likes to learn about them. The drawing he sent me isn't any particular spider; it's a "generic" spider. 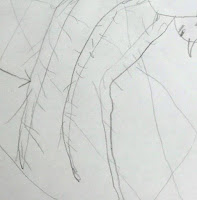 Even so, he paid attention to small details, like the hairs on the legs. They act as sensors, he notes on the drawing.

If you like spiders and you're stuck inside on a snowy day, why not draw a bunch? You can copy from photos in a field guide or from online sources (there's gorgeous photos at Spiders rule). Spend time closely observing the photos, and check out details: Can you see their eyes? What do their legs look like? Are there spikes or stripes or dots or zig-zags? What do their feet look like? Their fangs? Are they smooth or hairy?

Want to learn more about spider anatomy? Here's a great resource. Then go on a spider hunt around your house. You might find some dried-up spider remains in the windowsills, or live spiders lurking behind the stove. Draw pictures of those, too. But above all - have fun! 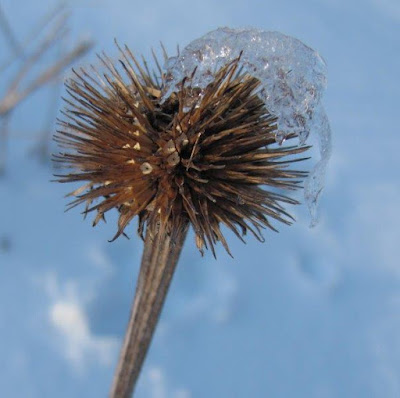 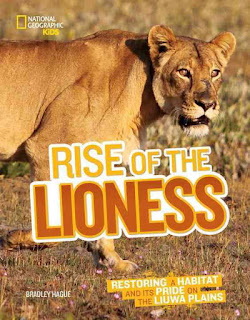 Rise of the Lioness: restoring a habitat and its pride on the Liuwa Plains
by Bradley Hague
56 pages; ages 8-12
National Geographic Children's Books, 2016

The Liuwa Plains are in Western Zambia - a perfect habitat for zebras, wildebeests, and lions. Back in 1972, the plains were declared a national park. But as the 20th century drew to a close, the plains were radically changed:

In less than a single human generation, Liuwa's ecosystem collapsed and by 2003, when peace finally settled, there was only one lion left: a lioness called Lady.

The thing about animals is that they don't just live in their environments; they shape them, too. And the Liuwa Plains without its top predators was "the environmental equivalent of tearing down a dam or blowing up a road," writes Hague. The loss of the lions created a trophic cascade, affecting the behavior of almost every animal in the habitat.

This book follows the scientists who studied Lady and figured out how to rebuild the local ecosystem. That meant reintroducing animals, including lions - easier said than done. But after many years, the Liuwa ecosystem was restored. This is a story of perseverance, patience, and pride. 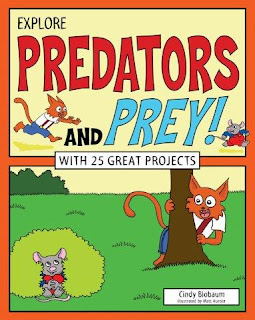 If you're interested in learning more about predator and prey interactions check out:

After introducing what predators are, and their prey, this book jumps right into strategies for hunting  and hiding. If you don't want to be eaten you might try camouflaging yourself, or disguising yourself with odors.

If you're a predator you might adopt certain strategies, such as stalking, or use tactics like echolocation. Or you might wait in ambush to attack some unwary snack walking by.

Every chapter is loaded with hands-on activities to try, and lots of fun facts, new words, and even a few jokes. 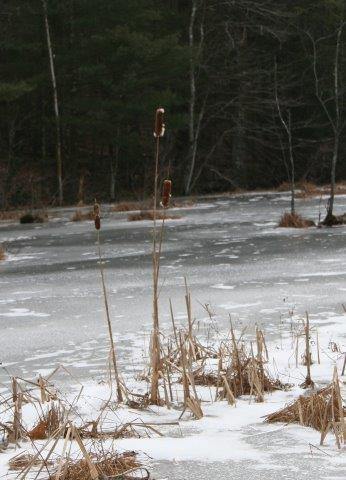 The season is tilting away from winter, but there's plenty of "winter" stuff to see outside. So head out on a scavenger hunt - but instead of collecting things, you'll be observing them, taking photos or drawing them, looking closer.... getting to know the winter-ish plants and animals around you.

Things to take on your hike:
a hand lens
a sketchbook and pencils
camera

Scavenger hunt list of things to look for and observe: 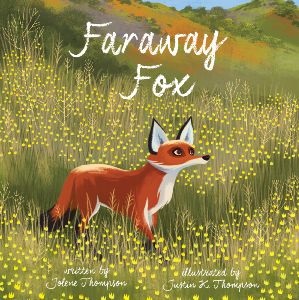 This was the forest where I lived with my family. We used to race through the undergrowth and rest under the great shade trees after playing all day.

Faraway from his family, Fox wanders the same forest he grew up in. He remembers beautiful trees and streams. But the landscape he travels through is unfamiliar, filled with cars and houses, and paved over.

What I like about this book is that is shows wildlife in an urban landscape. It also highlights the challenges a fox - or any other wild animal - faces when trying to return to their familiar habitat. This fox is lucky, because he won't have to dodge cars while crossing a busy highway. Instead, people have engineered a better solution to help him get home.

In an author's note, Jolene Thompson discusses human encroachment into wild animal habitats, and some of the things people are doing to minimize the impacts. Wildlife crossings have been built under highways and over highways to ensure that animals aren't cut off from the resources they need. She provides resources for people who want to learn more.

Go on a wildlife hike. What wild animals live near you? We have foxes, deer, coyotes, and lots of squirrels. There are even coyotes and deer in New York City (though you have to be out at dusk or in the evening to see them).

Design a critter crossing for crabs. Or turtles. Or deer. Then check out these examples of animal road crossings from around the world.

Get involved in Citizen Science, doing a salamander crossing. Information here. If you don't live near salamanders, ask your local fish and wildlife officers what sort of critter crossings they are working on. 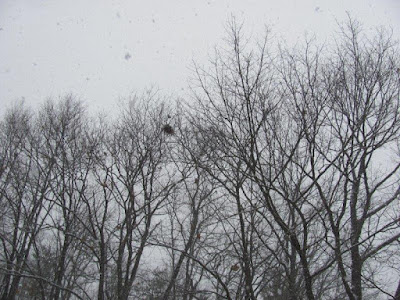 Last month I took a photo of these trees from my back porch. I thought it would be fun to look at the treetops and sky over a year, and compare what I see. It looks like a black-and-white photo, but that's just because it's snowing.

There's nothing dramatic happening yet - buds and leaves are still asleep. But when things are bare, you tend to notice things that you didn't before... like the squirrel's nest up in the treetop. What do you see when you look up in the branches of the trees in your neighborhood? And how does the sky change how the world looks? 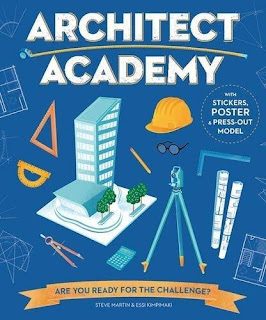 Part activity book, part "training manual", this book presents architecture in a fun way. In the first pages you'll get your trainee architect badge and a peek at what's in store: you'll learn about famous buildings, create designs for buildings, develop math skills architects need, and carry out special projects.

The first "assignment" is to design your very own dream home, complete with floor plans and a model. Then it's off to site plan review and drawing plans to scale. Congratulations! You are now a Qualified Draftsperson and ready for construction. But first, some math.

This is a perfect book for the kid who likes to build. It brings together diverse aspects of architecture and construction, including discussion of materials, climate, and design. You can even build a bridge (punch-out parts on the jacket). Kids will be introduced to eco-architecture, landscape architecture, and naval architecture. At the back is a pull-out game, poster, and lots of stickers you can use to mark your progress through the academy "lessons".

Posted by Sue Heavenrich at 12:30 AM No comments:
Email ThisBlogThis!Share to TwitterShare to FacebookShare to Pinterest
Labels: architecture, hands-on, math 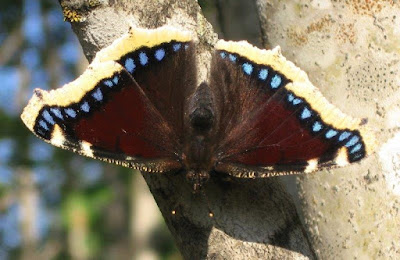 Meet the Mourning Cloak butterfly. It's one of the few insects that sticks around for the winter, hibernating in tree cavities, beneath loose bark, or in unheated buildings. They'll hide away anywhere they fit as long as the place protects them from winter winds and keeps then out of sight from predators - birds and squirrels.

When the weather warms, the Mourning Cloaks will flit about, looking for mates. You might even see them out in the snow!