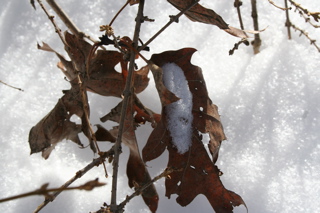 When snow and ice combine to make my steep driveway impossible to drive up, I wait for a sunny day and sprinkle ashes on top of the snow. I’m convinced the dark color of the ashes helps make the snow melt faster (not to mention, give me traction when I try to drive up).
Does color influence the rate of snow melting? You can test this by cutting squares of different colors of felt or construction paper and spreading them over the top of the snow on the next sunny day. After a couple hours compare how deep each color has sunk below the surface.
Do light colors melt the snow as fast as dark colors?
How fast do leaves and twigs and clusters of pine needles melt into the snow?
Posted by Sue Heavenrich at 6:44 PM 2 comments:
Email ThisBlogThis!Share to TwitterShare to FacebookShare to Pinterest
Labels: colors, melting snow

This morning thousands of fat, fluffy snowflakes hurtled earthward, adding to the three or four inches that accumulated yesterday. The snow was cold, powdery, too dry for snowballs. By lunchtime the sun broke through and the temperature climbed, leaving a melty top layer that will freeze into a thick icy crust tonight.
The quality of snow falling and layering into icy strata that, if this weather keeps up, may not melt till the Ides of March changes from day to day. Sometimes from hour to hour. I’m not sure if our language has enough words to describe these changes. But the people living near the North Pole do. According to folks who study such things, the People of the North have more than a hundred words for snow. Here’s a few:
qanuk = snowflake
qanik = falling snow
pirtuk = blizzard or snowstorm
cellallir = snowing heavily
pirrelvag = blizzarding heavily
kaneq = frost
kanevvluk = fine snow particles
nevluk = clinging snow particles
qali = snow that collects on trees
qanikcaq = snow on the ground
natquik = drifting snow
murvaneq = soft deep snow
qengaruk = snowbank
qetrar = crust on snow
upsik = wind-beaten snow
kiaoglaqq = wind-eroded snow
siqoqtoak = sun-crusted snow
tsiko = ice
kuhagaq = icicle
nutaryuk = freshly fallen snow on the ground
qunisqinea = fresh fallen snow floating on water
We may not have a hundred, but here are some of the words the English language has collected to describe the ice and snow of winter: blizzard, blowing snow, corn snow, crusty, drifting, dry, dusting, flurries, frost, glazed, graupel, hail, hard packed, heavy, hoar, ice, meltwater crust, powder, rime, slush, sleet, snowflake, snow squall, snirt, sugar snow, white-out and wind crust.
Do you know more snow words that should be added to the list?
If there is no word to describe the snow in your part of the world, make some up.
Posted by Sue Heavenrich at 11:29 AM No comments:
Email ThisBlogThis!Share to TwitterShare to FacebookShare to Pinterest
Labels: words for snow

Getting Around on the Snow

It just keeps on snowing – and the snow keeps getting deeper and deeper. When there’s a lot of snow on the ground, many animals have a hard time getting around. But not the lynx and snowshoe hare – their feet are large and wide compared to the rest of their body. And covered with extra hair. Those big, hairy feet allow them to float on top of the snow instead of sinking.
If you try walking on top of fresh, deep snow, you’ll sink up to your knees – or deeper! But if you lie down and make snow angels you don’t, because your body weight is spread over a larger area.
The trick to walking on top of snow is to spread your weight out. Like lynx and snowshoe hares, you need bigger feet. You can make your feet larger by strapping on a pair of snowshoes.
If you don’t have snowshoes, cardboard boxes (without topses) will do. Just grab a pizza box or two and some heavy-duty scissors. Put your boot on a piece of cardboard and draw a line around it – but five inches (about a hand-span) wider than the boot’s edge. Mark two dots on each side of the boot – that’s where you’ll poke holes for your shoestring “snowshoe bindings”.
Shape your snowshoe outline into an oval, and cut it out. Poke the holes where you marked, and use shoelaces or twine to tie them on your feet. Then grab a ruler and head outside.
First, take a few steps in the snow without your snowshoes. How deep do you sink?

Now tie on your snow-walking pizza shoes and take some steps. What’s it like to have big feet? Do you walk differently? More important – how far do you sink into the snow?
Posted by Sue Heavenrich at 10:06 AM 1 comment:
Email ThisBlogThis!Share to TwitterShare to FacebookShare to Pinterest
Labels: adapting to winter, snowshoes, walking on snow 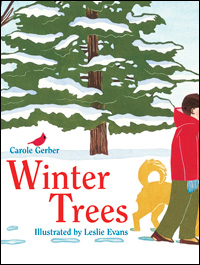 Winter Trees
By Carole Gerber, illustrated by Leslie Evans
32 pages, for ages 4-8
Charlesbridge 2008
Winter is spare, stark, gray and dark … a perfect season to hibernate in the library. Which is where I found Carole Gerber’s book, Winter Trees. Winter, Gerber explains, is the best time to look at trees because you can see their “skeletons” – the egg shape of maple, the oval of beech, the sloping sides of evergreen pyramids.
Winter Trees takes the reader on an adventure of exploration with a boy and his dog. Together they crunch through fresh, frozen snow. Together they compare the smooth peeling trunk of the birch tree to the yellow poplar’s furrowed bark, the soft ferny hemlock twigs to the sharp spruce needles.
Gerber, who volunteers at a nature preserve, wrote her first tree book about fall leaves. It was after slogging through snow and tapping a maple to make syrup, she said, that she was inspired to write a second book about trees. She wanted to focus on a different season. The challenge, Gerber says, is finding another group of beautiful trees that she can fit together in a single long verse.
Gerber says that she does a lot of research. Then she needs to find a way to translate what she learns into language that will appeal to young children and, at the same time, teach them about the trees in their back yards and city parks. She learns new things, too – “The most interesting is that evergreen needles are actually thin, pointed leaves!”
The result of all her work is an award-winning picture book – Winter Trees was named “Outstanding Science Trade Books for Students K-12” by NSTA. The book is more than a field guide – it encourages children to interact with the trees growing beyond their front door. Even if it is something as simple as collecting twigs and pine cones and crunchy dried leaves to decorate a snowman.
This post is part of the Nonfiction Monday Round-Up hosted this week by Wild About Nature. I picked up a copy of the book at my local library.
Posted by Sue Heavenrich at 7:30 PM 3 comments:
Email ThisBlogThis!Share to TwitterShare to FacebookShare to Pinterest
Labels: nonfiction monday, winter trees
Newer Posts Older Posts Home
Subscribe to: Posts (Atom)
Powered by