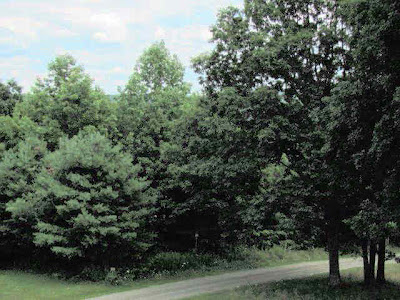 They say it will rain -
we pray, toss m&m's
to no avail.
Posted by Sue Heavenrich at 12:30 AM No comments:
Email ThisBlogThis!Share to TwitterShare to FacebookShare to Pinterest
Labels: seasonal observations, Tuesday view

One night while I was writing, a huge moth flew into my screen. Its wings were of the palest jade and spanned the width of my hand. It hung around - entranced by the glow of my desk lamp - long enough for me to find a field guide and learn that it was a luna moth. A moth? How could such a beautiful creature be a moth? I thought moths were hump-backed, earth-toned drab sisters to their more colorful butterfly cousins. 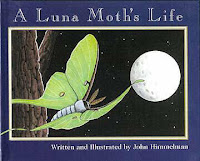 Luna Moths are named for the moon. One of my favorite books for kids is A Luna Moth's Life by John Himmelman (Children's Press). It's old - published in 1998 - but a gentle introduction to a gorgeous night flier. And it might be just the book that encourages your shy-of-the-dark kid to head out into the night looking for moths.

Himmelman follows the life of a luna moth, beginning with hatching from an egg to overwintering as a cocoon wrapped in a leaf, to emerging and laying her own eggs. It's simplified, and the birds never get the bug, but it's a great book for sitting on the couch and reading and then saying, "hey! why don't we go look for some luna moths!"

Sandra Markles's book, Luna Moths: Masters of Change (Lerner, 2008) is more recent and aimed at older readers - from 7 on up. Markle is a close observer and introduces readers to luna moths from A (antennae) to W (wings). There are close-up photos and every page has a "moth fact". Did you know that luna moths are only found in North America?

Markle gives the inside scoop on luna moth anatomy. Lunas have brains and really long hearts, and nerves ... but where's the stomach? They don't have a stomach! Oh, says Markle - that's because the adults don't eat. Want to know where Lunas lay their eggs? She's got it in there. Want to know how they make that leaf-cover to protect their cocoon all winter? She's got that too.  A great go-to reference for moth week.

Check out more neat books and science resources at STEM Friday.
Also check out some other cool nonfiction reading over at Nonfiction Monday.

The Poetry of Moths

Moths inspire poetry ... who hasn't been inspired to write about the moth, attracted to light, singeing the tips of its wings? Or, like the ancient haiku master, the contrast between the one ton bell and the fragile moth?

You don't have to be ancient to write moth poetry. Nor do you have to live in an exotic location. Anywhere you find moths, you'll find the inspiration for poetry. You might try your hand at haiku:

Haiku are short - like postcards they give a snapshot glimpse into nature. Traditionally, haiku is written in three lines with five syllables in the first line, seven in the second, and five in the last. But if your haiku has fewer syllables, don't worry - not every haiku poet follows the rules.

Try your hand at other kinds of poetry:
In Insectlopedia, Douglas Florian begins his poem about the Io moth like this: "The io moth/ Has mam-moth eyes/ That are not real-/ They're a disguise..." 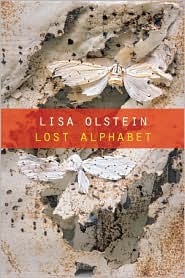 Lisa Olstein has devoted an entire chapbook to poetry about living with moths. Reading Lost Alphabet (Copper Canyon Press, 2009) is like leafing through a lepidopterists's journal. The prose poems reflect on wings, attracting moths to a sheet using a lantern, classification, caterpillars hatching from eggs and shedding skins. But at its heart, it's about people.

In one poem Olstein's character notes: "I have learned to peer at specimens through a small crack in the center of my fist." This is actually a good trick for getting small things in focus. In another poem her character observes a moth wing close up. "What appears smooth is feathered. What appears feathered is scaled." Moths, it seems, wear armor on their wings.

The art of Moths 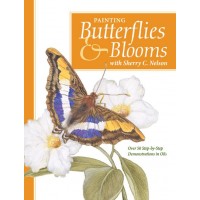 If you think painting moths (and butterflies) is just about getting the right colors, or the right brush, think again. Sherry Nelson, author of Painting Butterflies and Blooms (North Light Books, 2010) grounds her art in field work. Lots of it. She follows moths with her camera, or just watches them fly, grabbing quick sketches when they stop to feed at a flower.

Art is about close observation - which is where it connects with science. Nelson discusses colors, brushes and has a great section on "butterfly basics" that can apply to moths as well (body parts, wing features...). Then she gives a mini-lesson on how to paint butterfly - or moth- wings. There's a huge section on painting butterflies, followed by a detailed but not-so-huge section on how to paint the moths.

"As a rule of thumb," writes Nelson, "for every 10 butterfly species there are at least 100 moth species." Many of those are drab but, she says, there are some truly spectacular ones that you can find in your own back yard. For example: the Snowberry Clearwing, that moth that looks like a bumblebee and flies like a hummingbird.

Like butterflies, moths have a diversity of characteristics. Some have furry antennae. Some have iridescent wings (don't worry, she tells you how to paint those in the butterfly wing section). She introduces readers to five families of moth:
Even if you never pick up a paintbrush, this is a fun book to look through.
Posted by Sue Heavenrich at 12:30 AM No comments:
Email ThisBlogThis!Share to TwitterShare to FacebookShare to Pinterest
Labels: art, book review, moths, national moth week

Get to Know the Moths

The best way to learn the moths is to hang out with them. Watch them. Sketch them or take photos. Find out where they dine and what they eat for dinner. That means picking up a field guide... so you know where to look and who you're looking for. 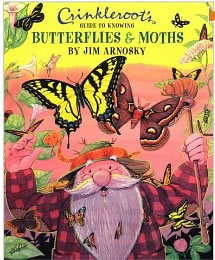 If you're looking for something more introductory than a field guide, a story to catch the imagination of a very young child and entice him to go moth-watching, there's no better guide than Crinkleroot. Jim Arnosky's "Crinkleroot" books are just plain fun, and you can usually find them at a library. In Crinkleroot's Guide to Knowing Butterflies and Moths children will get to know a little anatomy, how they eat, and a bit about their life cycle.

Then (if you want to skip the butterfly pages) they can head into the woods at night to find some moths. Arnosky's illustrated five of the "giant" moths": Sphinx, Polyphemus, Luna, Cecropia, and Regal moths. 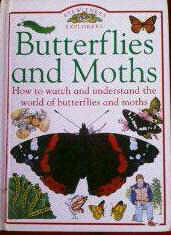 For slightly older children who want to know more about the moths they see, check out a copy of Eyewitness Explorers Butterflies and Moths by John Feltwell (Dorling Kindersley). This is an almost-pocket-sized book, easier to carry around than the bigger, more detailed DK moth & butterfly book. Also, it's got more hands-on activities: make a moth kite, go on an egg hunt, make a caterpillar observation cage. And it encourages children to make a butterfly/moth garden.

In addition to the usual lep (lepidoptera) info, this book shows how they fly, how moth eyes work at night, and gives close-up views of hairy legs, antennae, and long tongues. It encourages kids to take a closer look at the leps around them, and to carry a handlens and a sketchbook and colored pencils. It's almost like having a classroom in a book...
Posted by Sue Heavenrich at 12:30 AM No comments:
Email ThisBlogThis!Share to TwitterShare to FacebookShare to Pinterest
Labels: book review, hands-on science, moths, national moth week 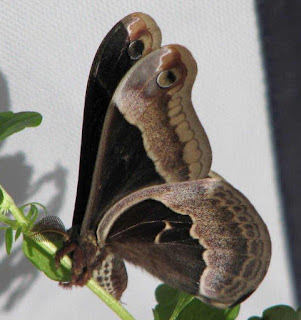 This week is the first ever ...

So get out of the house and join your friends and neighbors under the street lights, porch lights or even the lights down at the gas station to see who’s flying around at night. You can set up a sheet and light to attract moths to your backyard –  and just in case it rains, stock up on a few books about moths.

You don’t even have to wait until dark- last week I found a clearwing “hummingbird” moth visiting the bee balm, right alongside the bumblebees it mimics.
Posted by Sue Heavenrich at 12:30 AM 1 comment:
Email ThisBlogThis!Share to TwitterShare to FacebookShare to Pinterest
Labels: hands-on science, moths, national moth week, nature journal, night life 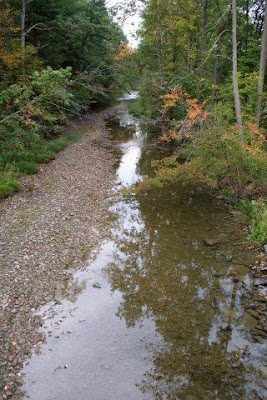 We have a number of small streams, creeks and rivers nearby. The one closest to our house shrinks to the merest trickle in the summer - unless there's a huge storm, and then it swells and roars its way down the ravine and spills into the creek below.

Our first creek expedition began like so many others: with a question. Where does the water come from, my kids wanted to know? And do otters live in the "river"?

So one summer day, when the water was low, we set off on an expedition. Like Lewis and Clark we determined to map this wild raging river as we hacked our way through the wilderness to its source. So we packed pencils, large sheets of "mapping" paper (brown paper bags cut open), a compass and plenty of provisions in case we got lost. We pulled on our boots and splish-splashed our way upstream.

We didn't find any otters, but we did find an adventure - and returned home with a map worthy of hanging on the wall.

It's STEM Friday - check out books and resources here. 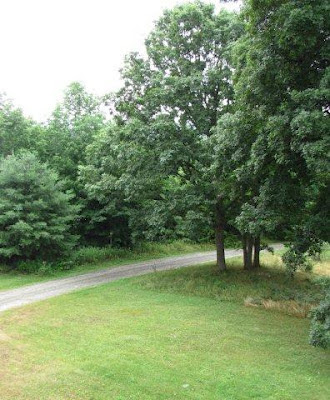 morning after rain
lawn covered with spider webs
a patchwork quilt
Posted by Sue Heavenrich at 12:30 AM No comments:
Email ThisBlogThis!Share to TwitterShare to FacebookShare to Pinterest
Labels: seasonal observations, Tuesday view 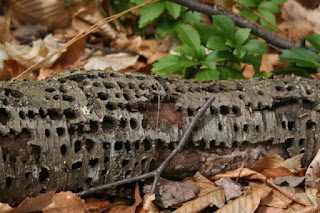 Trees live a long time - but not forever. Once it falls - whether limb-by-limb or crashing to earth all at once - it becomes home to new creatures.Next time you come upon a rotting log check out who's living in, on, and under it.

Make sure to return it to its original spot if you lift or roll it over. And remember to sketch the neat log-life you discover.
Check out cool books and resources over at STEM Friday. 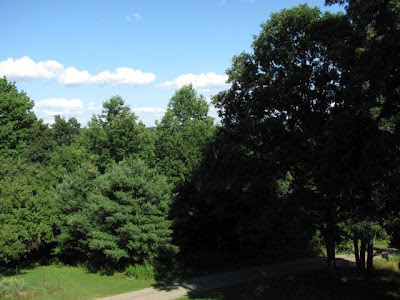 don't let that green fool you;
we need rain!
Posted by Sue Heavenrich at 12:30 AM No comments:
Email ThisBlogThis!Share to TwitterShare to FacebookShare to Pinterest
Labels: seasonal observations, Tuesday view

Where do snails go during the day? Are they nibbling lettuce in the garden? Are they climbing trees or cooling off in your wading pool? It depends on what sort of snail it is, and what sort of day it is. On a really hot summer day snails might be hiding in shady spots cooling off, so you'll need to look under leaves and buckets.

Snails don't move very fast - after all, they have only one foot. And when they do take off, they leave a slimy trail behind them ... a glistening, mucus-y thread that leads over rocks and pine needles. Give your snail a head start - it'll take them a minute to move 12 inches - and then check out their trails. Do they travel in a straight line? Or do they wander, meandering back and forth?

You can make a snail hide-out by turning a clay flowerpot on its side and placing it in a shady, damp area. If you want to find out whether an individual snail returns "home" every day, or whether it follows the same path day after say, mark the snail shells with colored marker or a dot of paint.
Posted by Sue Heavenrich at 12:30 AM No comments:
Email ThisBlogThis!Share to TwitterShare to FacebookShare to Pinterest
Labels: backyard science, hands-on science, snails, STEM Friday 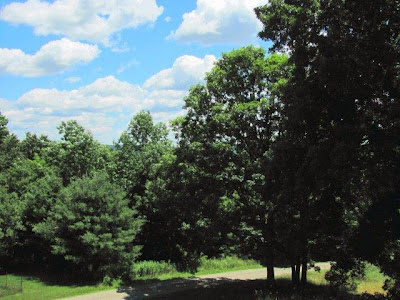