Spooked! How a Radio Broadcast and the War of the Worlds Sparked the 1938 Invasion of America
by Gail Jarrow 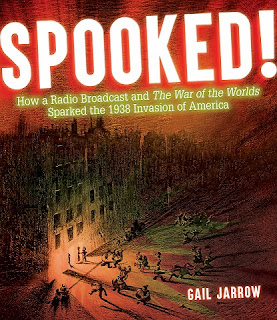 Mischief night is October 30, the night before Halloween. It's the night when older kids and teens head out to soap windows, TP trees, and other mischief. But on October 30, 1938, a radio theater company unwittingly perpetrated mischief on a national audience. They performed an updated production of H.G. Wells's science fiction novel, The War of the Worlds.

The novel portrays a martian attack on Earth - unrealistic, right? And yet, people tuning in late heard breathless announcers read alerts of an invasion. Because they hadn't heard the disclaimer at the beginning of the show, that this was an act of fiction, some people panicked. They piled in their cars and fled their homes. Others jammed phone lines, calling relatives for one last conversation. And some drove to the invasion site, hoping to get a look at the alien invaders.

How could people be so taken in by a radio show? It was the depths of the depression, Gail Jarrow writes. Hitler is rising to power, and his invasions of European countries have Americans anxious. So if a person turned on the radio after the introduction, they might believe that the "program interruptions" they heard were legitimate alerts about invasions on American soil. Like the best propaganda and fake news, the radio drama contained just enough truth to make it believable.

This is a story of historical events, so why am I reviewing it on my blog? Because there are STEM connections. Fortunately, Gail had time to answer Three Questions.

Archimedes: How does the history connect with science, technology, engineering, and math?

Gail: I'm hoping that kids will think about the history of technology in communication. Right now, we live in a world where the technology - social media - is way ahead of human behavior and culture. Just look at the Internet. Back in 1938, that's what was going on with radio. People got their entertainment and news from the radio. As I studied this event in history, I kept seeing parallels in the way people responded to a radio broadcast and the way people respond to social media now. The biggest issue is confirmation bias (that we tend to believe "news" that conforms to our ideology or politics).

Not only is this a hazard when reading news presented on our social media, but it can also sway scientists, says Gail.

Archimedes: Most scientists try to avoid bias. So how would it affect their research? 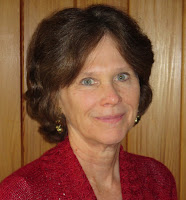 Gail: Some researchers might be too quick to dismiss an outlier - data or observations that are different from what they expect - and label it as a mistake or sample contamination. Instead, they need to look carefully to see what is going on. People could have easily checked whether there was an invasion by turning their radio dial to see whether other stations were reporting the same breaking news. Some people did that, and even called local police or CBS. But too many people assumed that what they heard was the truth.

Even more interesting, the researchers from Princeton who studied the "panic" fell victim to confirmation bias, and their study has serious flaws. They relied on interviews from people who lived near where the invasion was purported to happen instead of interviewing people across the country. Their sample size was too small to extrapolate meaningful results for six million people, and they relied on poor statistics. To compound the problem, editors of textbooks didn't read the published study carefully, and included it in textbooks.

Archimedes: I can see how kids might be exposed to "fake news" and confirmation bias in history and social studies. But science?

Gail: Sure. Think about kids doing a lab - especially when it's a lab that has been done year after year, and they know the range of results they're expected to get. So if they get data that doesn't conform to what most people get, they think they've done something wrong. It's tempting to toss the data that doesn't fit the hypothesis - but that's not the right way to do science. Instead, they should include it - and so should scientists doing research. Students should read about our mistakes.

We ended our conversation with a discussion about how important it is to read news from a variety of sources - to boldly turn the dial (or click the channel-changer on the remote) to a different station in order to verify what we hear. And, if we can't verify a report, then refrain from posting it or sharing it.

"I hope young people will really think about the things they hear, ask good questions, and use their critical thinking skills," Gail says.She is currently at work on her next book, Poison Eaters about fighting danger and fraud in our food and drugs.

Help teach your children (and maybe a few adults) how to sniff out "fake news". This School Library Journal article offers tools, resources, and context for what's happening in today's media.

Gail Jarrow has more great resources at her website.

Visit other stops on the Blog Tour!