We Write to Learn

One of the reasons I write for kids – well, for anyone, really – is because I want to know more about something. And that curiosity has led me on a lot of discovery adventures. For example, I knew that fungi were all around and that they play an important role in the environment. But I hadn’t realized how extensive their mycelial networks are.
Alisha: I agree, Sue. My curiosity has driven me to research and explore a variety of topics. Some colorful fungi caught my eye more than ten years ago, but when I began considering their importance and the ways we use fungi, from food to medicine, I realized it was a topic that could fascinate kids, too.
Sue: Another thing I learned was just how diverse Fungi are. This past summer was a good one for fungi, and I saw them popping up everywhere. As I learned more about them, I found even more fungi growing around me – because I knew where to look, and what to look for.
Alisha: Me, too! When I took a closer look in my yard, I discovered several different kinds right under my nose! Over the years, I’ve noticed lichens, bird’s nest fungi, and little brown mushrooms, but this year I found inky cap mushrooms, several types of shelf fungi, chicken of the woods, and even a lichen-covered insect wobbling across a trimmed branch.
Sue: I was surprised by the beauty of the fungi growing in my garden. One looked like an orange octopus emerging from the mulch! Or maybe a chicken foot? Another was so dainty that by the time I got my camera, it had melted into an inky spot. I learned my lesson: stick the camera into my pocket whenever I head out to the garden – or any place outside. Because you never know what you’re going to find.
Speaking of cameras and fungi photos, I’ll be posting photos of mushrooms every Friday this spring and summer over at my author Facebook page, and Alisha will post frequently on Twitter. Look for the hashtag, #FungiFriday 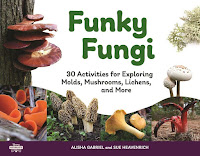 Check back next month for another post about our book-writing journey.  Funky Fungi, 30 Activities for Exploring Molds, Mushrooms, Lichens, and More is part of the Chicago Review Press "Young Naturalists" series. You can find out more about our book at the publisher’s website. It will hit bookstore shelves in three months, but you can pre-order it at your favorite local bookstore, or online at Bookshop.org
Posted by Sue Heavenrich at 1:00 AM
Email ThisBlogThis!Share to TwitterShare to FacebookShare to Pinterest
Labels: author interview, Funky Fungi, writing