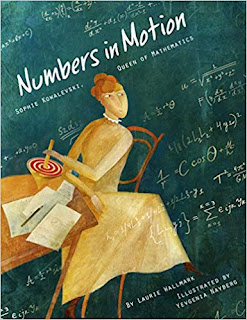 Sophie carefully pulled the string, and the top spun across her desk.

But Sophie’s not a kid playing with the top. She is a mathematics professor and she is trying to describe the tops rotation in an equation. It’s a difficult problem, and many others have tried – and failed. But Sophie won’t give up. If she succeeds, “her math might help scientists calculate the path of planets,” writes author Laurie Wallmark.

What I like about this book: The minute you open the cover, you know you’re in “mathland” – the end page (also serving as title page) is graph paper. I like that Laurie introduces me to a woman in math who is not well-known. And she doesn’t make light of the challenges Sophie faced, wanting to attend college at a time when women were not allowed in the lecture rooms. And I like the message of hope this book gives to girls interested in numbers.

Laurie ends with an author’s note about Sophie, and more about her math (partial differential equations). There’s also a cool bit about the many spellings of Sophie’s name due to transliterating names from the Cryllic alphabet to Roman alphabet.

This is Laurie's fourth book about a Woman in STEM, so I had to ask her One Question ~

Archimedes:  How did you come to choose Sophie as a subject for a book?

Laurie: I've loved math ever since I was a kid, so I wanted to write about someone who was known for her mathematical discoveries, not just computer scientists who were also mathematicians. I had never heard of Sophie before, but I came across her when researching possible subjects. I chose her for two reasons: First, her work on the rotation of solid bodies--like planets, footballs, and tops--was something kids could relate to. Second, the problem she solved was called a mathematical mermaid, and I thought kids would find that fun.

Make your own spinners! Try turning an old CD and a marker into a simple spinner - here's how.
Or construct a top using Lego pieces. For a real challenge, fold a spinning top out of a piece of origami paper. Here’s a video showing how.

Laurie Wallmark is a member of #STEAMTeam2020. You can find out more about her at her website.  Today we're joining Perfect Picture Book Friday, an event where bloggers share great picture books at Susanna Leonard Hill's website. Review copy provided by the publisher.