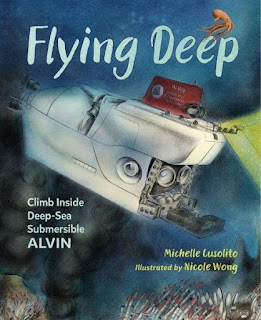 Imagine you're the pilot of Alvin, a deep-sea submersible barely big enough for three.

This book takes you on an adventure down, down, down to investigate a site where underwater volcanoes erupted. Two miles below the surface of the ocean, scientist are studying the living things taking hold near the hydrothermal vents. Getting there is a bit tricky, because you could get trapped in nets - and you only have three days of air - and who would come and rescue you?

What I like love about this book: The adventure of a day in Alvin! The story begins with launch, and divers checking that the submersible is dive-worthy. Then the pilot and scientists go down, down, down. I love the cool creatures that scientists discover in the deep, deep sea! There are ghost crabs, six-foot tall tube worms, and dinner plate-sized clams. I love the language Michelle Cusolito uses to describe fish - an elusive eelpout - and the technology - they toggle the slurp gun into position. Slurp Gun! How can you not love science when you've got a slurp gun? Another thing I love: that illustrations include women as scientists inside Alvin and on the research vessel, reflecting the reality of the Woods Hole crews.

And of course, the back matter - and there is plenty for everyone. Michelle writes about underwater food webs at hydrothermal vents. Too deep for sunlight and photosynthesis, the creatures of the deep depend on bacteria and microbes to convert chemicals vented from inside the earth into food. Those microorganisms are in turn eaten by bigger animals. She also writes about her sources: Don Collasius, a former Alvin pilot, and Bruce Strickrott, a current Alvin pilot. Illustrator Nicole Wong writes about her research to get the illustrations correct - from the technology to how it moves underwater. There are Alvin Facts, a glossary, and a guide to the organisms Alvin scientists have found, along with sources for further exploration. 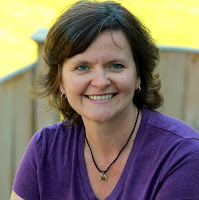 A conversation with Michelle

Michelle Cusolito met Alvin pilot Don Collasius when she was teaching fourth grade. When he explained how microorganisms around hydrovents converted chemicals to food (chemosynthesis) she was hooked. Then while doing PiBoIdMo in 2014, she jotted down "Alvin". A couple months later she'd typed up a draft that was, she says, riddled with mistakes.

Now it was time to tackle the research. Michelle checked out kid's books to read, visited websites for Woods Hole Oceanographic Institute and NOAA, and interviewed Don. As he talked about piloting Alvin, Michelle paid attention to sensory details. "For example, Don couldn't stand up inside because the space was so tiny." She also paid attention to details about safety protocols and how the submersible was prepared for underwater trips.

Then Michelle went to visit Woods Hole. "They have a science center with a portion of one of the old Alvin dashboards," she said. "And models of tube worms and clams." She read interviews with pilots, met Bruce Strickrott, a current pilot, and even got to go inside Alvin when it returned home for maintenance. "Bruce turned things on, like oxygen, so I could hear the noises that the pilot and scientists would hear. And he showed me how the joysticks controlled Alvin's collecting arm."

After revisions, she verified things with Bruce, such as the language that pilots and divers use during launch. Michelle encourages nonfiction writers to talk to experts. "Most of the time they want to talk to you," she said. "They are passionate about their work. As for Bruce, he also wanted to make sure that both the text and illustrations are accurate." Experts are especially helpful when writing about a complex topic for children.

I usually don't review books prior to their launch date, but Michelle has a special give-away opportunity for people who pre-order a copy of Flying Deep through her local bookstore, Eight Cousins. They will randomly select 5 pre-order customers to receive a crushed Styrofoam cup that went to the seafloor on Alvin. You can find out more about how pressures at the deep crush cups, and more about Michelle at her website.

Go on a video voyage with Alvin. Click here for a video by Woods Hole Oceanographic Institute. Learn more at this page.

Check out pompeii worms in this video.

Explore hydrothermal vents near the Galapagos Island in this video.

Design an underwater vehicle for exploring. What would you include? Baskets for gathering samples? Long arms that you could control with a joystick?