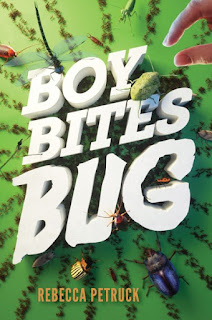 I love finding STEM-related fiction, especially when it involves insects! Boy Bites Bug is about middle school and growing up, discovering who you are who your friends are. It’s also about wrestling, racism, and respect. And, of course, bugs – some swallowed by accident, some on purpose.

This was the winter of the stinkbug invasion in our house, so I particularly loved the opening lines of the book: The intrusion of stinkbugs clumped on the ceiling in a back corner of the library, a splotch like crusty dried mud.

Of course one of those bugs ends up in Will’s mouth! But instead of becoming an outcast, he becomes “bug boy”, and kids good-naturedly tease him by making up names for lunch items in the school cafeteria: French flies; maggot-aroni and fleas.

Turns out that people all around the world eat bugs as part of their meals. They’re a great source of protein. So Will decides to do a class project on eating insects, and enlists the aid of Eloy Herrera. Eloy agrees, in exchange for Will’s help with wrestling. As their friendship grows, Will’s friendship with Darryl cools. Darryl had called Eloy a racial slur, and seems jealous of the time Will spends with his new friend. Meanwhile there’s wrestling practices and… where did that box of live crickets come from?


I love that this book has back matter: a guide to eating bugs, and a few recipes. Author Rebecca Petruck even rustled up some grubs to taste test: waxworms in cookies, crickets in tacos, and earthworm jerky. Last week she graciously squeezed time between school visits to answer a few questions.

Archimedes: This isn't a book about insects, but one about becoming a more thoughtful human. So what made you want to use entomophagy as one of the focal points?

Rebecca: When I began thinking about a new novel, I actually started with the ideas behind edible insects. It took a while to find the story. It evolved naturally, I think, from the facts of edible insects being significantly healthier for the planet in that they use far fewer resources to raise while producing the same, more, and often better nutrients than “traditional” meats and many other food sources.

Our planet is experiencing climate change of a type not seen in millions of years, when Earth was not a homo sapiens friendly place. But, our country is not friendly to all homo sapiens either. Human rights are for everybody, no exceptions. I don’t recall a conscious moment of thinking, “These two facts go together.” It was that special alchemy of the brain making a connection.

Archimedes:  Tell us how you did your entomophagy research: what experts you talked to, field trips, events, publications?

Rebecca: I immediately read The Eat-a-Bug Cookbook by David George Gordon, Edible by Daniella Martin, and National Geographic’s Ultimate Bug-opedia. All were invaluable in educating me and providing me with all sorts of cool buggy facts to use throughout Boy Bites Bug.

I made dishes like cricket tacos and waxworm cookies from ingredients that arrived alive. I also sampled a variety of treats from several edible insect online shops. I interviewed leaders in the entomophagy community like Christina Socha of Bugs,Inc, and Stacie Goldin of Entomo Farms, who are making huge moves in the Canadian food market. And I follow an entomophagy group on Facebook with posts by leading chefs and edible insect advocates from around the world.

I think the biggest takeaway for me was how contagious their enthusiasm is. They genuinely love edible insects for their tastiness and feel passionately about insects’ healthfulness for our bodies and our planet. It’s a triple win!

Also, I went to Triton Middle School, where Boy Bites Bug is set. I was a seventh grader for a day, and I attended a wrestling team practice and later a tournament. Because a main character, Eloy Herrera, is Hispanic-American, I hired four Latinx middle school students in Minnesota to read an early draft of the manuscript, received notes from all, and was able to interview two of them. I also became a fangirl of Chef Enrique Olvera and modeled Eloy’s dad after him. (An episode of Netflix’s “Chef’s Table” features Olvera.)

Archimedes: What do waxworms taste like? (I haven't tried them yet)

Rebecca: They taste like soft macadamia nuts. In Boy Bites Bug, I describe the waxworms being overcooked in cookies and making the texture leathery and the worms a bit flavorless. That happened to me, too. Bake small cookies like the recipe recommends, and that problem is solved.

I ordered my waxworms from San Diego Waxworms. They arrived alive in two small containers of sawdust. That entire scene in Boy Bites Bug is pretty much a recreation of my experience.

Archimedes: I would feel bad about eating bee larvae. Are there any bugs you wouldn't eat?

Rebecca: I haven’t eaten bees because of the collapse of so many bee colonies, though there is a delicious-seeming recipe in Gordon’s cookbook called “Three BeeSalad.” I want to note that the first edition was printed in 1998, and the dramatic increase of colony collapse spiked in 2006. Responsible insect foraging and farming is as important to any entomophagist as the safe preparation and eating of insects.

As far as eating bugs, I’m game to try anything once. But I haven’t gone out of my way to track down dung beetles or cockroaches, both of which are edible. And I will never again eat earthworm jerky. Blech!

Head over to this page on Rebecca's website for some discount codes for edible insect online shops. You can also read the first five chapters of Boy Bites Bugs.

Thinking that you want to try eating some insects? Then check out this book: 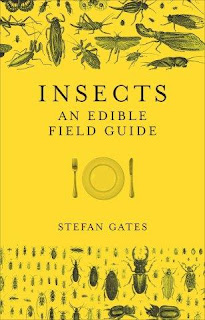 This book covers more than 70 edible bugs from all over the globe. Part field guide, part cooking guide, it provides what you need to know before diving into dining on insects. It’s divided into sections by continent: northern Europe, southern Europe, Asia, Africa, North and South America, and Australia/Pacific Oceania.

The introduction includes safety issues (don’t eat arthropods if you have a shellfish allergy), and the environmental and nutritional benefits of chowing down on insect protein. While not a cookbook, it does introduce readers to a diversity of insects that you might not have thought edible.

Today we're joining the STEM Friday roundup. Head over to see what other cool resources STEM bloggers are sharing. Review copies from publishers.