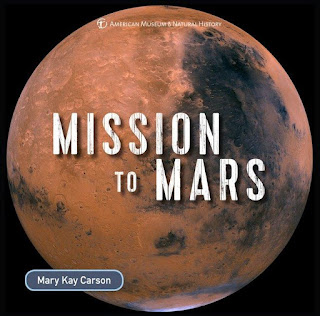 Mars. What image just popped into your head?

Science fiction movie? Roman god of war? Night sky-watching on a warm summer's night? How about space exploration? Because in your lifetime people could be headed to Mars.

In this book, author Mary Kay Carson begins by comparing Mars to Earth. Both planets are tilted, so Mars has seasons just like Earth does. And both have days that are similar in length - Mars days are 37 minutes longer than Earth days. But a Mars year lasts 687 days, and it's a lot colder. Think Antarctica. Now think even colder!

What I like about this book: Carson shares history of Mars exploration, from telescope to landers, orbiters, and the more recent rovers that roll across the desert-like landscape. The rovers send images back to earth, as well as data from their onboard labs that can detect bacteria and other signs of life. Carson goes into detail about what sort of evidence for life one might hope to find on the dry, cold planet.

Scientists continue discovering new information from the red planet. Just a couple years ago an orbiting satellite found evidence of water on Mars. And sometime in the next weeks, NASA plans to launch a new mission to Mars - perhaps as early as tomorrow (May 5) called InSight.  InSight will land on Mars and then drill into the crust to record geological data.

"NASA scientists want to know if Mars has a hot, liquid center like Earth, and how thick its outer crust layer is," writes Carson. As for future manned missions to Mars, humans will go there someday, she says. "We already have a lot of the technology and know-how." And should you think you might want to be one of the astronauts heading to Mars, there's a checklist at the end so you can determine if you're "mission ready". 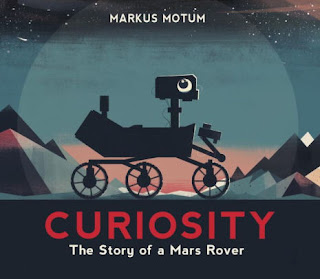 Wherever you are in the world right now, I'm a very long way away. I'm not even on the same planet as you.

On August 6, 2012, the rover Curiosity touched down on the surface of Mars. This book is the story about her mission: to discover more about Mars and search for evidence of life.

What I like about this book: Curiosity tells her story in first person. How often do you get to read a story told by a Mars rover? First she tells why she was sent to Mars. It's a hostile environment for humans, so she and her rover sisters and orbiter buddies can send lots of good information back home to help humans get ready for a voyage. Curiosity takes us on a field trip to the lab where she was built and gives us the inside scoop on the tools she carries and her power source (plutonium).Then - her trip to Mars, and the tension-filled deployment from orbit to the surface. Of course she took a selfie!

The illustrations give this book a Martian ambiance. Motum uses the deep blues of space to highlight the warm, rusty hues of the Martian surface. Plus there's a timeline of Mars Missions at the back.

Beyond the Books:
Check out these Postcards from Mars - favorite images sent back by Curiosity.

People who go to Mars will need protective space suits that will also allow them to do work. Read about space suits here, and check out the latest in Martian fashion here. Then head over to NASA to design a spacesuit for Mars.

Watch InSight mission launch for Mars. You can watch it on the website here.