This week is Computer Science Education Week, so flex your coder muscles and try some fun coding activities. Why this particular week? To honor two women who helped pioneer computer programming.

Ada Lovelace was born on December 10, 1815. She had a talent for mathematics and is often considered to be the first computer programmers. She introduced the concept of repeating processes, or "looping". The programming language, Ada, is named after her. 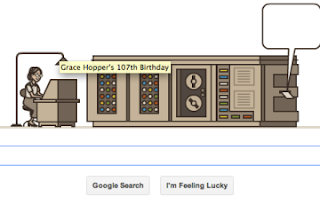 Admiral Grace Murray Hopper was born December 9, 1906. She developed the first compiler for a programming language. She also popularized the term "debugging" - using the phrase when she had to remove a moth from her computer.

While computers are found in so many things we use, from cell phones to our cars (not to mention laptops!) - most of us have no idea what coding is. Here's the secret: "coding" is just another way of saying "telling a computer what to do".

Here's another secret: it's fun! The best way to learn about computer coding is to give it a try. So head over to the Hour of Code and check out all the coding activities. You can create a program in Minecraft, or Star Wars. You can write code to send Frozen princesses Anna and Elsa skating in a snowflake design, or create a Flappy Bird game.

There are coding activities for people from age 6 to 60 (or even older). Here's your chance to Boldly Go where you have not gone before! Give coding a chance - at least for an hour this week. And have fun!