The Frogs of Winter 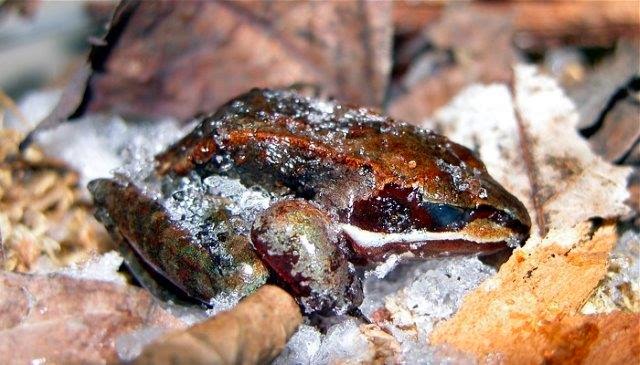 Some critters, when it turns cold, burrow beneath the soil to stay warm. But frogs don't have claws, so they make do with scuffling under a pile of leaves. Leaf piles do help insulate you from the cold, but they don't keep these frogs from freezing.

That's OK, though, because some of these frogs -wood frog, Cope's gray tree frog, eastern gray tree frog, spring peepers, and western chorus frog - can survive freezing. When things warm up, they thaw out and hop away.

Frogcicles. Cool. But a bit more complicated than just turning into a block of ice. There's a process involved to protect the frog. Once ice starts to form in the skin, the wood frog's liver starts converting stored sugars into glucose. That glucose is carried through the bloodstream to tissues where it helps keep cells from completely dehydrating and shrinking.

Over winter, as much as 70 percent of the water in a frog's body can be frozen. One ecologist says that if you opened up a frozen frog its organs would look like "beef jerky" and the frozen water around the organs would resemble a "snow cone".

What starts this freezing process? According to the scientists in this video, all it takes is exposure to ice crystals. They stay in their frogcicle state until the snow melts - which, for frogs in the northeast, could be a long time coming.

Today is STEM Friday - head over to the STEM Friday blog to see what other bloggers are talking about.
Posted by Sue Heavenrich at 12:30 AM
Email ThisBlogThis!Share to TwitterShare to FacebookShare to Pinterest
Labels: adapting to winter, frogs, winter