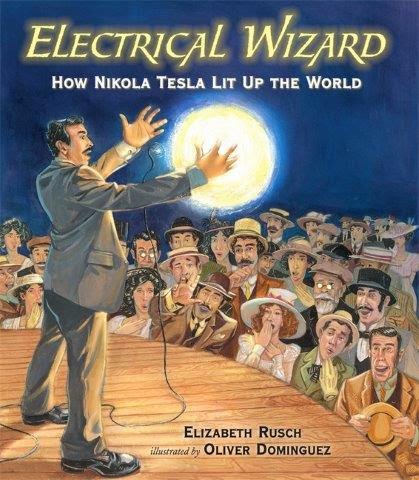 "The night of Nikola Tesla's birth, lightening zapped, crackled, and flashed overhead." A pretty fitting beginning for the life of a kid who wanted to harness the power of Niagara Falls and turn it to electricity.

As a young man, when electricity was generated by direct current, Tesla wanted to figure out how to use alternating current to run motors. When he figured out how, he traveled to America to meet with Edison.

"Nonsense," said Edison. People liked their direct current; why change something that's not broken? So Tesla set out to show that alternating current would work, and that it was safe. At the height of the "current war" between Tesla and Edison was the Chicago Worlds Fair - and it was to be powered by electricity. Tesla's alternating current. But Tesla had even more tricks up his sleeve: developing the turbines and generators that would convert Niagara Falls into electricity to light the homes and streets of Buffalo. 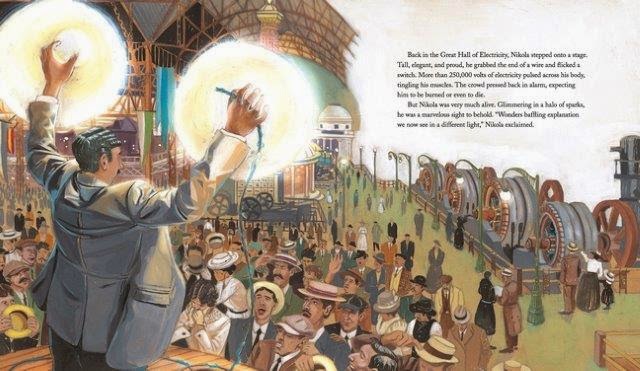 Tesla was a man full of ideas: could tides be harnessed to produce electricity? What about the spinning of the planets? Back matter includes further information about the rivalry between Tesla and Edison, explanations about DC and AC current, and how a spinning crank makes electricity.

Today is STEM Friday - head over to the STEM Friday blog to see what other bloggers are reviewing.   Review copy provided by publisher.

Posted by Sue Heavenrich at 12:30 AM
Email ThisBlogThis!Share to TwitterShare to FacebookShare to Pinterest
Labels: engineering, invention