The Mother of Nuclear Fission 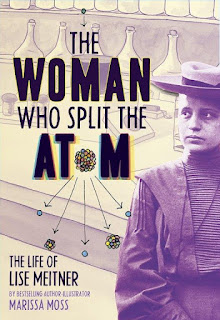 Over the past year, scientists got closer to making nuclear fusion (the combining of two atoms to produce energy) a reality. Meanwhile, let's check out the story of ...
The Woman Who Split the Atom: The Life of Lise Meitner
by Marissa Moss
264 pages; ages 10-14
Abrams BFYR, 2022
Lise Meitner was a curious girl who slept with a math book under her pillow. She grew up in Vienna where Jews had more opportunities than in other countries. Still, going to college, becoming a scientist – that was for sons, not daughters. Even going to high school wasn’t something girls did in most of Europe in the late 1800s.
But Lise persisted, eventually earning a doctorate in physics. She was ready to do research even if no one wanted to work with a woman. So Lisa made her own instruments and got to work. Eventually she partnered with other physicists and chemists and discovered how uranium decayed. She built a cloud chamber so she could see trails of radioactive particles, wrote papers, and gained acceptance in the scientific community.
But just when it no longer mattered that she was a woman, it mattered very much that she was Jewish! Now all employees of the institute where she conducted research were required to be members of the Nazi party. Lise was no longer welcome as a scientific collaborator, and her name was stripped from her published scientific papers.
As German scientists turned their attention to chemical weapons and the race to build an atomic bomb, Lise turned her efforts to getting out of Germany. Alive. She wanted no association with the potential doomsday weapon and called for peace, not war. 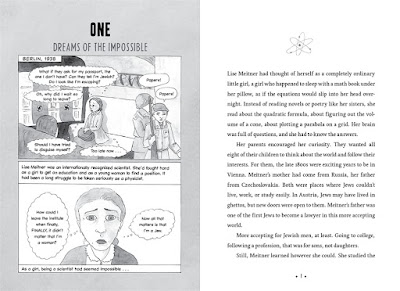 What I like about this book: I like the way author Marissa Moss shows how hard it was for Lise to make her mark on science – and how easy it was for her contributions to be erased.  I like the comic panels that open each chapter, showing slices of Lise’s life – especially the drawing of her cloud chamber. And I like the back matter, which includes a timeline and profiles of  scientists mentioned throughout the book. There’s even a short physics glossary for those of us who still count electron shells on our fingers.

This month, STEM Tuesday is featuring books about nuclear science and the scientists who discovered radioactivity. If you're looking for more books about atomic energy, please join us there!
Posted by Sue Heavenrich at 1:30 AM
Email ThisBlogThis!Share to TwitterShare to FacebookShare to Pinterest
Labels: biography, Marvelous Middle Grade Monday, MMGM, radioactivity, women in STEM