Last spring was a tough time for new book releases, what with libraries, schools, and book stores unable to host public events. So I'm sharing some STEAM books that I didn’t get time to review, and I feel are worth another look.

This week I’m blasting off with set of four books in the Nomad Press Picture Book Science series that explore our solar system. The books are written by Laura Perdew and wonderfully illustrated by Shululu (Hui Li).
theme: nonfiction, space, solar system
The first line of each book is a greeting from the Universe: Hello Earthlings!  Universe is proud of her Stars, and the Sun (which she calls the Shining Star of our Solar System), the Earth, and the Moon. And she tells all about how they formed and how old they are – did you know Sun is somewhere around 4.5 billion years old? Don’t put candles on that birthday cake!
The Moon is basically a chip off the old block – and has its own power, pulling the tides and providing night light for migrating birds. Stars are each a sun for their own planets (if they have them). And then there is Earth, the one-of-a-kind planet upon which we live and breathe … and hopefully work to keep healthy. 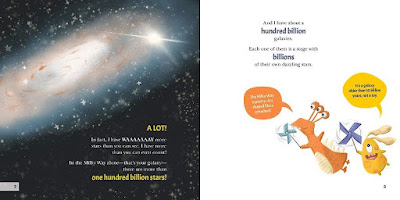 What I like about these books: They are conversational and informal, with the Universe speaking directly to the readers. She presents facts and figures as if you’re having tea and she just happens to mention the weather, or how sailors used to navigate by constellations. I like the two cute aliens who hang out on the pages commenting on the facts and occasionally sharing what they think – and sometimes explaining things. 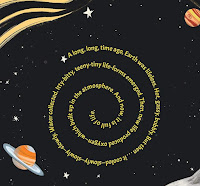 I like that each book begins with a poem. I like that each book ends with an activity. And I like the aliens – so much that I had to ask Laura One Simple Question:
me: Whose idea was it to have the two aliens kibbitzing?
Laura: Ha! That was my idea (and of course the illustrator did an AMAZING job bringing them to life and really giving them personality). Those aliens deliver the layered text. At first, my editor wasn't too keen on them. We had settled on having the Universe be the narrator, but the alien idea wasn't her favorite. Since we'd been working together for so long, I was able to ask if I could write the first draft with them in. She said “yes” and her editorial notes on that first draft included "ha has" … I knew I'd hooked her.
Beyond the Books:
How well do you know your home planet, Earth? Find a patch of planet – it can be as small as a 12-inch by 12-inch square and as large as a garden patch or a backyard – and watch how it changes over the next few weeks. Draw a picture of what you see each week. What do you notice?
Keep track of the Moon for a month. You probably know that the moon goes through phases, from full to half to … where did it go? Make a calendar for four weeks, and each night draw what the moon looks like to you. Do you notice any patterns in how the moon grows and shrinks?
Look for some stars in the sky. Can you find their constellations? Check out this NASA site to learn more.
Laura is a member of #STEAMTeam2022. She’s got another picture book series coming out this summer, all about biomes. And she’ll be right here on the blog this coming Monday sharing some thoughts about writing STEAM books. You can find out more about Laura at her website.
We're joining Perfect Picture Book Friday, an event where bloggers share great picture books at Susanna Leonard Hill's website. Review copies provided by the author.
Posted by Sue Heavenrich at 1:30 AM
Email ThisBlogThis!Share to TwitterShare to FacebookShare to Pinterest
Labels: #STEAMTeamBooks, earth, moon, Perfect Picture Book Friday, solar system, stars, sun