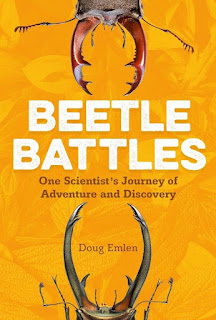 Doug Emlen has been obsessed with big weapons for as long as he can remember: mastodon tusks and triceratops horns, moose antlers and all other sharp and dangerous things on display at the natural history museum. Now, a professor of biology in Montana, he continues with his passion, studying antlers, horns, tusks. It just so happens that those weapons belong to beetles – and some of the species “…so small that their weapons only become apparent with a microscope,” he writes.

In this book, Emlen takes us into the field as he determines to find a bizarre animal to study in an exotic location. And that meant searching for beetles. The cool thing about beetle weapons: they come in so many sized and shapes. Some are stubby, some long and slender, some like crowbars, some like sabers. They may look small to us, but relative to their body size, beetle weapons can be huge. For example, mammoth tusks represent 3% of the animal’s body weight; a beetle’s horns can be 30% of its body weight.

Emlen’s book begins with great hopes to study a rhinoceros beetle – but (as happens in science) he could not find a large enough population to study. So he switched to dung beetles – of which there is no dearth of supply! Emlen takes readers along on his adventure to Barro Colorado, where we learn what it takes to “do science.” His days are filled with designing experiments, collecting data, analyzing date, rethinking the experiments (when they don’t work), and doing it all again.

What I like about this book: I like the journal entries interspersed through the book, and the wonderful photos. I like his no-nonsense tips on collecting monkey dung. And I really like how he follows the logic of animal weapons to military weapons and the arms race. There’s a wonderful chapter in which he compares his “sneaky beetles” to cyberhackers.

In Which Doug Reflects on Science and Writing

A couple months ago, between zoom classes and research, Doug Emlen found some time to share his thoughts on beetles and science. Turns out that he was born and raised in the Finger Lakes region of New York, and went to Cornell University. We chuckled about the fact that he is now “out west” and I, raised in the west, am now living a few miles away from his alma mater.

“My goal in writing Beetle Battles is to reach people and make science fun,” Doug said. He wrote to middle graders because he figured they might be interested in digging into the tough stuff. And confessed that he learned a lot in the process. (It’s definitely not the same as writing a text book!) Along the way, he discovered his writing voice.

“When someone suggested re-writing a section, I did it,” he said, noting that he had to invest time and energy into learning how to tell a narrative story. And sure, there’s a lot of science in this book – the topic is evolution of weapons – Doug wanted to make it an adventure.

“I had fun with this project,” Doug said, admitting that he rewrote the book a few times. But each time he found what worked better. What kept him going was the desire to make his story accessible to fourth through seventh-graders. “I feel it’s important that more of us [scientists] find a way to reach this age group.” He especially feels this urgency because of the level of science denial he sees in our society.

Writers are often told to “show, not tell,” but that “showing” turned out harder to do than Doug expected. There were so many questions along the way: should he give priority to the science or to the narrative. He chose the narrative, showing what it is like to be a scientist.

“I wanted to help kids understand the day-to-day life of a scientist in the rainforest, and how the rainforest smells.” While his journey as a scientist didn’t begin until he was in college, his curiosity was whetted when he was a kid traveling with his father, also a biologist. The cool thing about science, he says: “Basic research turns out to be important in ways you don’t expect.” Who would have expected research on dung beetles to reveal a deeper understanding of the arms race?

You can find out more about Doug and his dung beetle research here – in an interview he did with NPR’s Terry Gross a few years ago.

Thanks for dropping by today. On Monday we'll be hanging out at Marvelous Middle Grade Monday with other bloggers. It's over at Greg Pattridge's blog, Always in the Middle, so hop over to see what other people are reading. Review copy provided by the publisher.

Posted by Sue Heavenrich at 12:30 AM
Email ThisBlogThis!Share to TwitterShare to FacebookShare to Pinterest
Labels: author interview, beetles, evolution, insects