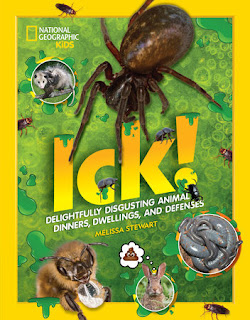 Some of the coolest things in science are also gross – so leave it to Melissa Stewart to dig deeper until she has enough to write a totally disgusting book about things slimy, smelly, and altogether ICKY! Things like animals that eat poop, squirt blood from their eyes, fling their feces – or weaponize their farts.

But, she warns, “don’t be too quick to say ick!” There’s a good reason that baby pandas eat their mom’s poop … or that cockroaches eat the fingernail clippings left on the bathroom floor. As for building a home, animals use the resources at hand. For white-nest swiftlets, that means layering thread upon thread of sticky saliva against a cave wall until a nest is formed. If that sounds yucky, you’ll want to skip the section about the bone-eating snot flower worm. And yes, that is really its name.

And you know how toads eat flies? Turns out there are flies that eat toads. Alive. Pretty disgusting, right?

Like many of Stewart’s books, this one began years ago. While on safari in Kenya and Tanzania she watched a mother black-backed jackal vomit up partially digested food in order to feed her pups. The following day she learned that some antelopes regurgitate and re-chewe their food as many as four times to extract every possible nutrient from the plants they eat. So of course, she began jotting a list of animals that vomit their dinners … and kept adding to it until she had enough examples to make a book.

I caught up with Melissa by email to ask her One Question:

Archimedes: As gross as this book is, are there any tidbits you left out that were just too ... disgusting?

Melissa: Every disgusting detail I could possibly unearth ended up in the book, but there were places where I had to tone down my language a bit. My awesome editors, Shelby Lees, encouraged me to go all out in the rough draft. Then, during revisions, she let me know when I needed to rein it in.

Right at the end of the process, Shelby and I were surprised by a mandate from someone higher up. We had to limit the number of times we used the word "fart."

We didn't have to eliminate it completely (Thank goodness!), but we did have to use it very sparingly. This was especially tricky for the spread about the western hooknose snake, which makes a farting sound to defend itself. If you read the text, you can see all the creative synonyms we came up with. It actually turned into a fun challenge.

Field trip time: keep your eyes open for disgusting and gross things in nature. Maybe you'll see a mama bird clean out the nest (that is disgusting!) or watch a wasp sting a caterpillar and then roll it into a gooey ball to carry home for hungry larvae. Even if you are limited to your back yard or balcony, there are plenty of revolting, unappetizing, nasty, odious, and yucky things happening all around you - all you have to do is pay attention.

Melissa is a member of #STEAMTeam2020. You can find out more about her at her website, and make sure to drop by her blog, Celebrate Science, where she talks about writing, nonfiction, and science (of course). Review copy provided by the publisher.