Have you ever thought it would be fun to be an explorer? Maybe one of those folks who jaunt off on a National Geographic expedition to uncover lost civilizations or discover new species? If so, then you'll like the Explorer Academy series coming out from National Geographic Children's Books. 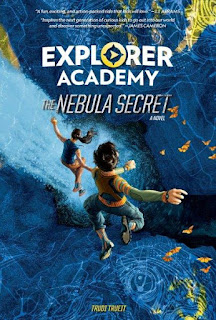 Twelve-year-old Cruz Coronado looks like the typical surfer dude. When we are introduced to him, all he wants to do is catch one more wave before he hops aboard a flight headed 4900 miles east to Washington DC. He's been awarded a coveted spot at the elite Explorer Academy. The school where his aunt teaches, next to the institute where his mom did secret research before she died.

When he reaches the school there's orientation. But first, a gold band is attached to his arm. It's synched to the school's computers to allow access to classrooms and labs. It also monitors all of his vital functions.

Before he can head out on expeditions, Cruz and his classmates have skills to learn. That means class time and lab time - though these labs include virtual reality simulations that can allow the students to explore different habitats and technology before heading into the field. But someone is sabotaging the simulations and putting students in danger. When Cruz learns that his mother's death was no accident, he worries that someone is trying to kill him as well.

Cruz finds himself at the center of an international search for a missing formula that only he can decode. Fortunately, he's got a posse of friends who he trusts, and some technology that links him with his good friend back home. And an aunt who understands that pizza is an essential item.

What I like about this book: there are maps, a code, and tons of technology. Some of it sounds like futuristic dreaming, but the tech in the story is inspired by real National Geographic explorers and their research. For example: 4-D printing and drone bee-bots. Back Matter (yay!) reveals the "truth behind the fictional" technology and also real explorers whose work inspired the adventures.

Want to know more? Visit exploreracademy.com to test your code-breaking skills, check out the wristbands, wearable computers, and other technology and meet real-life scientists. You can also read the first chapter of The Nebula Secret and preview the next book in the series.

On Monday we'll be hanging out at Marvelous Middle Grade Monday with other  bloggers. It's over at Greg Pattridge's blog, Always in the Middle , so hop over to see what other people are reading. Review copy provided by publisher.