There are so many cool animals living on our planet, and so many ways to introduce their stories to children. Here are a couple released last fall that I really enjoyed.
theme: animals, nonfiction 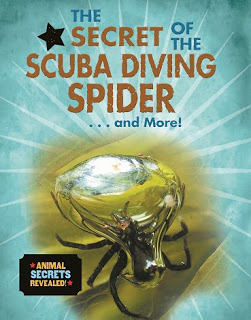 It's not an easy job: the spiders are only as long as one to three grains of rice; they're hard to find in the water; and they are becoming rare because of habitat loss and pollution.  But the scientists find their spiders and we learn how the spiders build their diving bells.

What I like about this book: It's got more than diving bell spiders. There are whistling caterpillars - they whistle warning calls to their buddies- as well as bats that jam signals from other bats, and zombie ladybugs. Yes! Zombie Ladybugs! And cockroaches because if you're talking extreme bugs, you can't leave the roaches out.

Informative, fun, filled with unexpected surprises about weird creatures - this book's all that plus a hands-on activity at the end. And it's filled with photos that will engage kids and draw them into the strange lives of these critters. 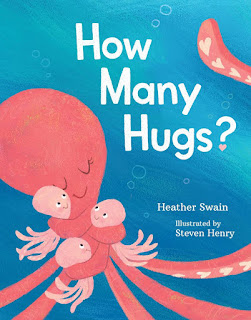 Since snakes have no arms, nor any feet,
they can slither about very discreet.
But this lack of appendages surely would make
an awkward affair if a hug from a snake.

From critters with no legs to those with hundreds, Heather Swain counts hugs. Using rhyme, she answers questions every kid has asked: how many legs does a millipede have?

What I like about this book: It's fun. It's imaginative. And it's filled with math, especially division. For example, if you have two arms how many hugs can you give at one time? Just one - which is half of two.  As the number of  legs/arms increases, the math gets a bit harder. But the concept remains the same: H = L/2 (the number of hugs equals the number of legs divided by two). So.... that millipede with 750 legs? I'll leave the math to you.

The other thing I like - there's back matter. A spread of facts about each animal and its leggy relatives.

Find out more about Diving Bell spiders. Check out this video. Then head over to Ana Maria Rodriguez's website where you can find a teacher's guide for the book. There are plenty more activities there plus a crossword puzzle.

How many hugs can you find in your neighborhood? Check out the animal wildlife living in and around you. Jot down each animal you see and how many legs it has. Then calculate how many hugs it could potentially give at one time.

Invent a way you could live under water. How would you collect and store air to breathe?