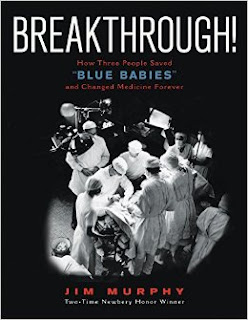 If you have a young reader who loves mysteries, technology, invention, science  - a kid who thinks that someday she will want to be a doctor, put this book in her hands! Or his hands.

Author Jim Murphy tells the story of one of the first successful heart operations ever performed. It's about the medical breakthrough that not only saved the lives of tens of thousands of children but also opened the way for future heart surgeries.

And it took place in 1944. An unlikely team performed this high-risk surgery: surgeon Dr. Alfred Blalock; pediatric physician Dr. Helen Taussig; and African-American lab assistant Vivien Thomas. Blalock received the fame, but it was Thomas who developed and perfected the surgical technique to repair the hearts of children born with "blue baby" syndrome. In fact, he was the only person who had ever carried out the surgery successfully on a research animal.

Most of the people working at Johns Hopkins had no idea of Thomas's genius - many of them thought he was a janitor. Indeed, during that time of segregation, he was often treated as such. In one instance the director refused to order equipment that Thomas needed to conduct research. And yet, without his guidance, Blalock would not have been able to do the surgery.

Had history gone in a different direction, Thomas might have attended medical school. But the depression swallowed his meager savings. Desperate for a job, he landed in Blalock's lab. Fortunately, Blalock was looking for an assistant who could learn quickly and even suggest avenues for investigation. Often, Thomas would have to invent the tools he and Blalock would use in their surgeries.

Murphy touches on many topics as he tells this story, including the debate on using animals in medical research, how women and blacks were treated in the medical/research field, and the role of innovation in developing technology. But mostly, he tells a compelling story.

Today's review is part of the STEM Friday roundup. Drop by STEM Friday blog for more science books and resources. On Monday we're joining the folks at Nonfiction Monday. Review copy provided by the publisher.