The Case of the Vanishing Bats 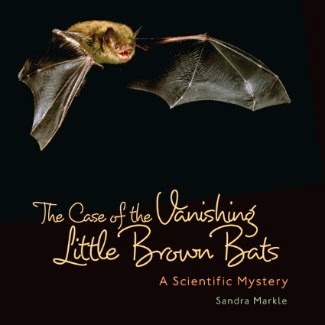 If you're looking for a perfect Halloween mystery, this book's for you. You see, little brown bats were once among the most common kinds of bats in North America. But by 2013, their population had dropped so low that scientists wondered whether they should be listed as endangered species.

This story begins in 2007, when a team of scientists from the NY State Dept. of Environmental Conservation goes to a cave near Albany. Their job: to count hibernating bats. What they found were lots of dead bats, some with fuzzy white noses. The following year they found even more dead bats.

What was killing the bats? Was it climate change? Pesticides? A virus?

In her book, Sandra Markle follows a team of scientists working on the bat-killer mystery. She follows them into caves and into their labs. The scientists determine that the killer is a fungus – but they still have more questions: what will happen to the populations of other animals that depend on the bats? Some animals rely on bats for their suppers, and farmers rely in bats to control crop-munching insects in the ecosystem.

Markle provides amazing bat facts and lists ways people can help their local bats. She’s also got a long list of books and other resources for folks who want to explore bats more deeply.

Today is Halloween. It's also STEM Friday! Head over to the STEM Friday blog to see what other people are reviewing. On Monday we'll join the roundup over at the Nonfiction Monday blog where you'll find even more book reviews. Review copy provided by publisher
Posted by Sue Heavenrich at 12:30 AM
Email ThisBlogThis!Share to TwitterShare to FacebookShare to Pinterest
Labels: animals, bats, endangered species, environment