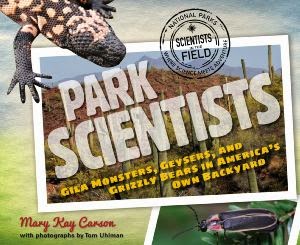 I've got a basket full of  new "Scientists in the Field" books - so this month we're heading out on some armchair field trips.

The National Park Service is nearly 100 years old (their anniversary is 2016) and for all those years the rangers and park scientists have been studying the best ways to preserve and protect the landscape, plants and animals.

"Because national parks are protected places, researchers are able to do long-term studies of ecosystems, geysers, and climate," writes Mary Kay Carson. They don't have to worry that their natural laboratory will be clear-cut for a mall or highway project.

In this book, Carson and photographer Tom Uhlman document scientists at work in three of our most popular national parks: Yellowstone, Saguaro, and Great Smoky Mountains. She opens each section with a park brief: how big, how many visitors, when it was established, and reasons to visit. Then she takes us into the field with the park scientists.

In Yellowstone (our oldest national park, established in 1872 by Ulysses S. Grant) we head into a hot spot to learn more about why the temperatures are rising. But first, everyone has to suit up with protective clothing and heat-resistant boots. Then there's the science gear: infrared camera, temperature probes, gas detectors and more. On another trip into the field we learn how scientists apply GPS technology to track and manage grizzly bears.

Then it's down to Arizona to track Gila monsters and count cacti. From there it's a cross-country trek to the Smoky Mountains which really do live up to their name. We head into the forests on a salamander safari - the Smokies are home to more than thirty species of salamanders. Data from the salamander study indicate that a rise in the earth's temperature will erase much of the red-cheeked salamander habitat. The good news? There will be some refuges where the salamanders can thrive.

Carson ends with an evening light show: fireflies in the Smokies. There's a wonderful glossary at the end, some sources (for those who want to dig deeper) and an index that makes it easier to revisit cool stuff you forgot to bookmark. Oh, and did I mention the abundant and awesome photos?

Check out the trailer for the book here. Then head on over to the STEM Friday blog to see what other people are reviewing. And on Monday we'll join the roundup over at the Nonfiction Monday blog where you'll find even more book reviews. Review copy provided by publisher.