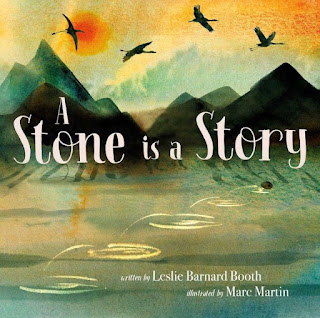 Most of my ideas for picture books are inspired by questions my children ask. My debut nonfiction picture book, A Stone Is a Story, was inspired by a question my older daughter, then age 7, asked one evening at dinner.
“Where do rocks come from?”
On its face, this question might seem simple, but it’s not! It led to a fascinating dinnertime conversation about Earth’s formation and structure, the rock cycle, and deep time. In fact, Earth’s rocks have always been here. They have been here since Earth formed. But they don’t stay the same. They are continually transforming. They melt, harden, break apart, and recombine as they move through the rock cycle.
That’s why it was so wonderful, when, in 2021, I got to see rock transform right before my eyes.
Summer in Iceland
That summer, my family traveled to Iceland for my husband’s work. For 3 months, we lived in a small cabin on a wind-whipped hill along a fjord in northern Iceland. During our stay, we learned that the nearby Fagradalsfjall volcano was erupting – and that it was possible to hike to a nearby ridge to see it in action.
Known for its geothermal pools and bathing culture, Iceland is one of the most volcanically active places in the world. Iceland sits along a seam in Earth’s crust where two tectonic plates meet. These two plates, the Eurasian Plate and the North American plate, are slowly drifting apart, causing magma to well up between them. This magma sometimes erupts at the surface as lava. We decided that before we made the journey home, we had to see this geological phenomenon firsthand.
Fagradalsfjall
To view the Fagradalsfjall volcano, we drove several hours to the Reykjanes Peninsula. We parked in a roped-off field among many other vehicles. People from all over the world had come to Iceland to see this natural spectacle, and many different languages swirled around us as we walked toward the stark, treeless mountains looming ahead. Together we marched, locals and tourists, young and old, up a ridge marked with stakes by Icelandic authorities. 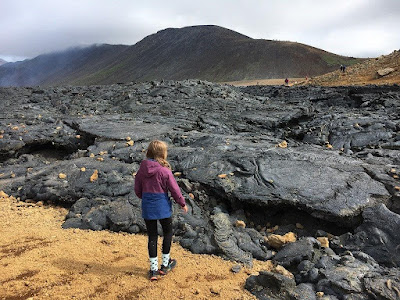 photo of Leslie's older daughter standing at the edge of the Fagradalsfjall lava flow.
photo by Leslie Barnard Booth
We finally came to a fresh lava flow made up of still-steaming black rock, and we thought we must be close! But after several hours of hiking, we still hadn’t glimpsed the volcano. My daughters were getting tired. The mist had thickened around us. We were damp and cold. We kept hiking up, only to hike down, and then straight up again. We started to wonder if the volcano would even be visible today. Maybe it wouldn’t. Maybe the sky wasn’t clear enough. Maybe this whole torturous trek was in vain!
So we sat. And ate lots of Nutella. My younger daughter seemed to perk up. “Let’s go a little farther,” she said. “To where those people are sitting.” She pointed to some people on a ridge in the distance.
A Rock Is Born
Once again, we hiked down, then up again, toward that distant ridge. That’s when we heard the roar of the volcano, and saw its fiery light flashing through the mist.
We made it to the place my younger daughter had pointed out. We sat among people from all over the world, and watched as bright orange lava fountained into the air and poured downslope, scabbing black as it snaked into the valley, where it pooled and steamed and hardened, turning to rock.
As we made our way back down the ridge, my older daughter picked up a rock at the edge of the lava flow. Very recently, this rock had been a liquid. It had been magma flowing deep belowground, then lava surging into the air, and now it was a hard gray fragment she could hold and admire. And just like that, she held in her hand the answer to her question.
Leslie Barnard Booth is a member of STEAM Team 2023. Her book, A Stone Is a Story will hit bookstore shelves next summer.  You can learn more about her book – and find educational resources on the rock cycle and geology – at her website, lesliebarnardbooth.com.
Posted by Sue Heavenrich at 1:30 AM
Email ThisBlogThis!Share to TwitterShare to FacebookShare to Pinterest
Labels: #STEAMTeamBooks, earth, geology, guest author, rocks