So You Want to be a Cyberspy? 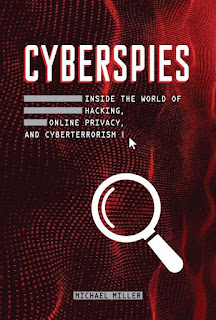 Cyberspies: Inside the World of Hacking, Online Privacy, and Cyberterrorism
by Michael Miller
120 pages; ages 11-18
Twenty-First Century Books/Lerner, 2021
In this book, Michael Miller provides a primer on cyberspying. He shows how digital threats are used against individuals, businesses, and entire governments. Each chapter focuses on a specific aspect of cyber threats, and includes steps you can take to protect yourself.
The first chapter takes readers into the world of cyberintelligence – and yes, there are jobs for those who are interested.  He gives a glimpse into cyber command at NSA. From there, he shows how people can use computers to legally search government records, news archives, and more. He contrasts that with a chapter describing how people use computers to obtain private – and in some cases secret – information. They often employ phishing emails to obtain access to business and government secrets.
A pair of chapters take a close look at cyberspying and politics. Miller shows how individuals and government entities have used digital technologies to hack elections. He pays particular attention to the 2016 election in the United States, the fake twitter accounts and propaganda spread through social media. And he answers the question: Which is more hackable – voting machines or mail-in ballots? He also defines the difference between real “fake news” (propaganda and outright lies) versus the tendency for some people to label real news as “fake” when they don’t like it. And he discusses why some people are more prone to fall for fake news/propaganda than others. Miller knows his stuff, because a couple years ago he published an entire book about Fake News, reviewed here.

Miller discusses cyberattacks against businesses and governments. Hospitals have lost access to their computers, tying up admissions and patient care for hours. Towns, school districts, and library systems have been held hostage to ransomware attacks. The perpetrators are usually criminals extorting victims for money.
Cyberterrorism is a broader attack on a country or region’s systems and infrastructure. These attacks, backed by governments, tend to go after power grids, telecommunication systems, financial institutions, and other systems. The goal is to destabilize the society and create chaos. Miller documents cases of cyberwarfare.
The need for cybersecurity has skyrocketed leading Miller to close with a chapter on career advice for potential cyberspies.

Things to Do in Spring

look for the first leaf