This week we continue in our study of Classified and Top Secret true stories. 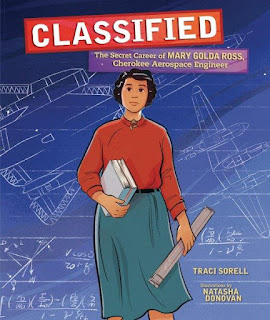 Classified: The Secret Career of Mary Golda Ross, Cherokee Aerospace Engineer
by Traci Sorell; illus by Natasha Donovan
32 pages; ages 7 - 11
Millbrook Press, 2021
theme: biography, STEM, Native American
Young Mary Golda Ross pushed her pencil across the page.
In the 1920s, girls weren’t expected to enjoy – or excel – in math and science. But Mary did. Not only that, she showed other girls they could do it too!
Mary got a degree in math and taught high school for a while. When the US entered World War II, she got a job as a mathematician at Lockheed Aircraft Corporation. She helped solve design problems and enjoyed the challenge of the research.
And then she wanted to become an engineer so she could design spacecraft! After the war, the Space Race heated up, and Mary was one of the engineers on a super-secret team. Not only did she break barriers as a Cherokee woman in a male-dominated field, she helped get a man on the moon. 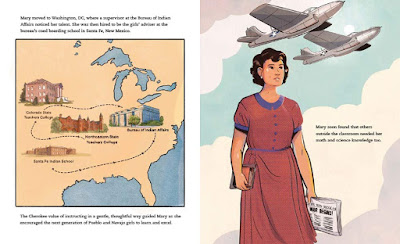 What I like about this book: I love Traci Sorell’s storytelling voice. I love the spirit of determination that comes through the pages. But what I really love is the thread of Cherokee core values that carries us from the first page to the end. The value of education and opportunity for everyone. The value of gaining skills in all areas of life. And especially the values of working cooperatively with others. Traci writes about these values and more in Back Matter.
Traci is one of the authors who contributed to the book, Nonfiction Writers Dig Deep. In it, she says that she tries to focus on making the invisible visible. So I had to ask her One Question:
Me:  Can you share why it is deeply important to you to make visible the too-oft ignored achievements of indigenous people?
Traci: In focusing on sharing the accomplishments of Mary Golda Ross – the US’s first Indigenous female engineer and Lockheed Corporation’s first female engineer –  I wanted to shine a light on Mary’s background. Other survey books on women in STEM or hidden figures in the global space race mention that Mary was a Cherokee Nation citizen and her great-great-grandfather, John Ross, was a former Principal Chief. And that’s it. But as Mary tells us in her own words, the Cherokee values she was raised with coupled with her firm foundation in mathematics allowed her to blaze the trail she did. I could see this, and wanted young people to know her identity, the values of her family and community, and how the strong focus on education that the Cherokee Nation had helped her tremendously.
When Mary went into spaces that were primarily occupied by white men at the time, she brought her whole self to the experience and transformed it. I want to encourage the next generation of mathematicians, engineers, and other STEAM-related workers to know Mary. She – and others since her early days – helped pave the way for people doing the work now (there are Native engineers working for NASA today).
Beyond the Books:
Before you build a spacecraft, you need to learn how things fly through the air. One way to study that is to build a catapult. Here’s a few different catapult ideas.

Traci is a member of #STEAMTeam2021. She is the author of We Are Grateful: Otsaliheliga ᎣᏣᎵᎮᎵᎦ  and has another book coming out next month: We Are Still Here! Native American Truths Everyone Should Know. You can find out more about her at her website
Today we’re joining Perfect Picture Book Friday, an event where bloggers share great picture books at Susanna Leonard Hill’s website. Review copy provided by the publisher.