Science With Peeps began one year after Easter when the kids discovered that, though they loved marshmallows, they had not eaten the peeps. It was now ten days post-Easter and the peeps were getting tough (or as we gardeners like to say, hardened-off). Soon they could be used as hockey pucks. 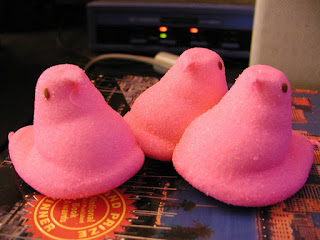 "We could see how long they take to decompose in the compost bin," one kid suggested. OK, but who was going to collect that data?

"We could see how long they take to dissolve," said the other. (It takes longer than you think.)

"We could put them in the microwave," said one.
"And what?" I asked.
"Compare them to marshmallows."

First, it being science, we wrote a list of questions. Things like:
Then we tested them under various settings and... well, go do it and have fun.

We aren't the only ones to do Peep Science. NPR's Adam Cole used stale peeps to determine the speed of light. It's something you could do at home - here's a link to their video. All you need are stale peeps, a glass dish, and a microwave.
Posted by Sue Heavenrich at 12:30 AM
Email ThisBlogThis!Share to TwitterShare to FacebookShare to Pinterest
Labels: hands-on science, physics, Wednesday Explorers Club