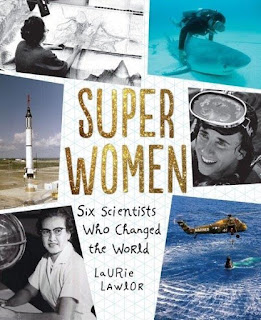 "Imagine being a highly trained astronomer who's forbidden to look through a state-of-the-art telescope," writes Laurie Lawler. Or that you're an accomplished underwater cartographer not allowed on a research vessel, or a chemist not allowed to work in a research lab.

Not because you don't have the skills - but only because you're a woman. We're not talking about women in science hundreds of years ago, but within our lifetime. Absurd, right?

And yet, Lawlor has compiled half a dozen stories of real scientists who had to fight against gender discrimination to do their research. Her tales include:
The book is filled with photos, and complemented with a glossary where you can quickly look up "quasar".

Today we're joining the STEM Friday roundup. Drop by STEM Friday blog for more science books and resources. Review copy from the publisher.
Posted by Sue Heavenrich at 12:30 AM

Things to Do in Winter

measure how deep the snow is

catch snowflakes on your tongue

make your own icicles

explore a frozen stream or pond