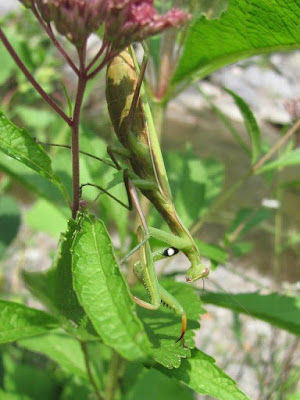 A couple weeks ago I joined a group of like-minded curiosity-seekers on a "tracking expedition". It was a gentle afternoon walk up a creek to see what tracks had been left in the mud. We found plenty: raccoon tracks, coyote, herons, sandpipers, more raccoon... and those of us who love bugs got distracted by the flittering, fluttering, creeping, crawling, six-legged denizens of the creek-bank.

Among them, a praying mantis. Turns out that most of the mantids one sees in my neck of the woods (upstate NY) are from somewhere else. This one is a European mantis (aka: praying mantis), and an identifying feature is the cool underarm target that you can see. The mantis has spiny legs and sharp claws that prickle when it walks on your bare arm. But it really wants to hide out during the day, camouflaging itself in the greenery so it can ambush a meal and avoid becoming a meal.

They can hear (through a slit on the underside of the thorax, between second and third pair of legs) - and hear sounds in the ultrasonic range. Which is useful because they fly at night, when bats are hunting, and can detect bat echoes. You can read about that here. Cool, eh?

And those spiny legs? To help them hold onto their prey. Read more here.

Want to learn more about praying mantises? Grab your field notebook, a handlens, maybe a camera, and head outside to watch a couple. They have cool, triangular heads that make them look a bit like aliens. And cool mouthparts.
Posted by Sue Heavenrich at 12:30 AM
Email ThisBlogThis!Share to TwitterShare to FacebookShare to Pinterest
Labels: insects, nature journal, observation, Wednesday Explorers Club