Can an Aardvark Bark? 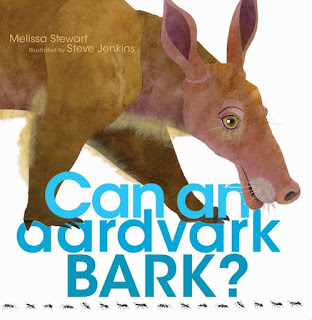 Can an aarvark bark?
No, but it can grunt.
Lots of other animals grunt too.

This is such a fun book, filled with barks, squeals, grunts, roars, and whines. Also bellows, growls, and laughs. Animals, it turns out, make all kinds of sounds. For all kinds of reasons - and Melissa gives us an inside look at what those sounds mean.

What I like LOVE about this book: The sounds! If you're reading it out loud, expect your listeners to bellow, roar, grunt, and bark along with the animals. Every page if filled with SOUND - and plenty of examples of animals that make those sounds. Did you know that frogs bark and rats chortle? OK, I've heard frogs bark and quack, but laughing? I haven't heard wild things laugh, chortle, or giggle with glee. But they do and Melissa gives us the facts.

The illustrations! Steve Jenkins does such spectacular work, and it's always fun to open up a new book filled with his cut-and-torn-paper artwork.

The structure! This is subtle and it took me a couple pages to realize what was going on - but then I discovered a pattern to the questions and the answers.I don't want to spoil the fun of discovering it yourself.

The best thing? Readers learn that animals use a diverse array of sounds to communicate their thoughts and feelings. Just like people do. This is the perfect book to share with a kid who dreams of becoming a translator for their dog, cat, snake, goldfish, or pet rock. OK, maybe not the rock...

Beyond the Book:
Learn to speak a foreign language: animal. Listen to the sounds an animal makes, and imitate them. If you don't have an animal living in your home, find a place where you can listen to animals: a pet shop, zoo, or even sitting on a park bench listening to - and watching - squirrels and birds. Write down the different sounds your animal makes.

What does your pet say? Hang out with an animal long enough, and you begin to understand their language. Sometimes it's sound; sometimes it's posture; sometimes it's a combination. Can you write a dictionary to explain what your animals mean when they bark, growl, purr, or whine?

Go on a listening walk. Early mornings or evenings are good times to listen to animals out and about. What do you hear? Frogs? Geese and ducks talking to each other as they migrate? Insects?

Learn to speak bird. Cornell Lab of Ornithology has a site dedicated to songs and calls.

On Monday, head over to the GROG Blog for an interview with Melissa. She'll talk about her journey from idea to book (and how long it took!) and a few other things.