March is Women's History month, so I thought I'd kick it off with a true story of a woman in science: 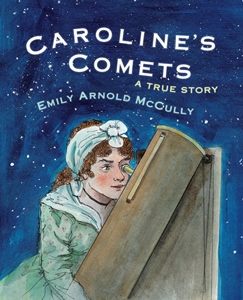 Weaving Caroline's memoir and correspondence into the text, Emily McCully takes us into the life of an early astronomer.

Caroline's father was the first to show her the stars; her mother taught her the practical skills she would need. But then, when she was 22 years old, her brother William invited her to join him in England. In addition to helping around the house, he needed some help recording his astronomy observations - and some help building a telescope.

So Caroline became his assistant inventor. She pounded and sifted dried horse manure so her brother could build a mold for making the mirror. Their first telescope magnified things 6,000 times. That might not seem like a lot these days, but back in the 1700s it was astronomic.

They discovered that the Milky way was made of stars. They discovered a new planet (Uranus). And then, as the King's Astronomer, William began a sweep of the sky.Caroline discovered nebulae and star clusters and two new galaxies - and all the while she did needlework, kept William's accounts, and cleaned all the equipment.

Then, December 21, 1786, Caroline discovered a comet. McCully fills the pages with wonder, discovery, and comets. She also includes great back matter with a timeline, glossary, and additional notes.

Posted by Sue Heavenrich at 12:30 AM
Email ThisBlogThis!Share to TwitterShare to FacebookShare to Pinterest
Labels: comet, night sky, women's history