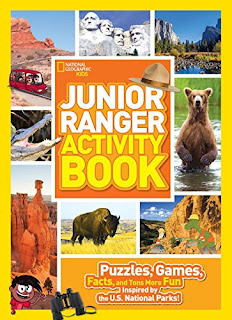 This year the National Park Service turns 100 years old. Sure, there are national parks older than that... but why not celebrate 'em all! Which is why NG Kids came up with this book full of puzzles, games, and facts inspired by our nation's parks "for the people".

The cool thing: you don't have to visit a national park to do many of these activities - they're plain fun and perfect for any road trip to a state park or forest or campground or picnic area.

Fun stuff includes mad-libs (those funny fill-in-the-blank stories), anagrams, jokes, quizzes, challenges to "name that thing", and close-up photos as well as maps and other handy stuff to know.

The writer behind this book is Christy Mihaly. I called her a couple weeks ago to ask about national parks and the cool facts and fun activities she stuffed between the covers if this book.  First thing Christy said was, "There's a White House initiative to get kids into parks this year. Fourth graders and their families get a free pass. Check out Every Kid in a Park's website, and think about visiting a park before August 31st.

Even if you don't have any fourth graders, there are sixteen fee-free days this year. The idea: to encourage people to explore our nation's parks. Given that 2016 is the big year, when did Christy start working on the book?

Christy: About a year ago (April 2015). National Geographic Kids conceived the idea for this book and then Bender Richardson White, a book production company, contracted with me to do this project. By June I'd finished the first draft, and worked on revisions over July and August. Some of the materials are National Geographic Kids, and I created other things, notably themes for some of the pages, like "arts in the Parks" and "Rocks in the park". It was really a team effort.

Archimedes: I like the "Name that (fill in the blank)" pages - like the one with images of feathers. They're fun and the sort of thing a kid could do anywhere, not just a national park.

Christy: Yes, the idea behind all the activities was to make sure they were accurate, kid-friendly, educational, and FUN. That meant challenges for me as well as the graphic designers - especially with the feathers page, because so many feathers are brown or earth colors. Think turkey feathers, owls, hawks... so we were looking for colorful feathers. What birds have brilliant feathers that kids might see in a national park? The challenge is to make the information engaging and inspire kids to get outside and pay attention. And while many pages feature activities that can be done anywhere, there are a lot that are park-specific. There are also maps of trails and battlefields.

Christy: GORP is short for "good old raisins and peanuts" - but my recipe includes granola and M&Ms in addition to peanuts and raisins.

Archimedes: What's one thing you learned while working on this project?

Christy: I learned a great deal about our national parks - like the fact that there are more than 400 national parks, historical sites, and monuments. I also learned lots of cool animal facts, such as grizzly bears can smell food from a great distance away.

You can catch up with Christy at her website. After our talk, I realized that it's been awhile since I've visited a national park. So this summer I plan to shake the dust out of my hiking boots and join the national park birthday celebration. But first I'll make some Peanut-Free GORP with pepitas, sunflower seeds, raisins, dried papaya, dried cranberries and some M&Ms.
Review copy provided by the publisher.
Posted by Sue Heavenrich at 12:30 AM
Email ThisBlogThis!Share to TwitterShare to FacebookShare to Pinterest
Labels: animals, national parks, nature, puzzles