Got a robot-crazy kid? Then this just might be the perfect collection of books for her (or him). The Cool Robot series looks at robots used on earth, in space, and underwater. 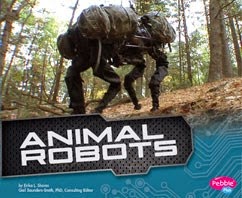 Animal Robots
Some engineers get their robot-inspiration from animals. For example, fins and fish tails might be the perfect thing to help steer an underwater robot. Some animal-robots are toys, while others are working bots, like a robotic fish that searches for pollution in the ocean. 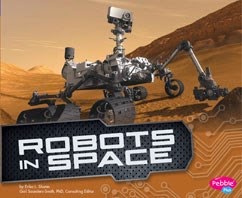 Robots in Space
You already know one robot that works in space: the Mars rover "Curiosity". But did you know that astronauts use robotic gloves to help them grip tools better? And all those unmanned probes flying though space to Mercury, Pluto, and beyond – they are robots, too. Soon there might even be a robotic astronaut. 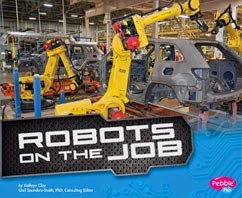 Robots on the Job
If you’ve watched car ads, you’ve seen factory robots. There are even restaurant robots that make sushi. But did you know there are robots that work in hospitals? 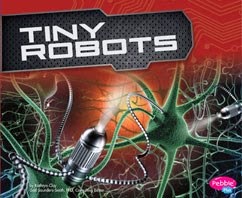 Tiny Robots
Remember that science fiction book where people are shrunk and sent inside the human body in a tiny submarine? We’re not there yet, but scientists are working on a pill-sized robot that can be swallowed and will take pictures inside the human body. They’re also working on nanobots – robots too tiny to see. Someday nanobots might be used to fight disease.

Today is STEM Friday. Head over to the STEM Friday blog to see what other bloggers are reviewing. Review copies provided by publisher.
Posted by Sue Heavenrich at 12:30 AM
Email ThisBlogThis!Share to TwitterShare to FacebookShare to Pinterest
Labels: engineering, medicine, Robots, technology