Dinosaur Week - How Big Were Dinosaurs? 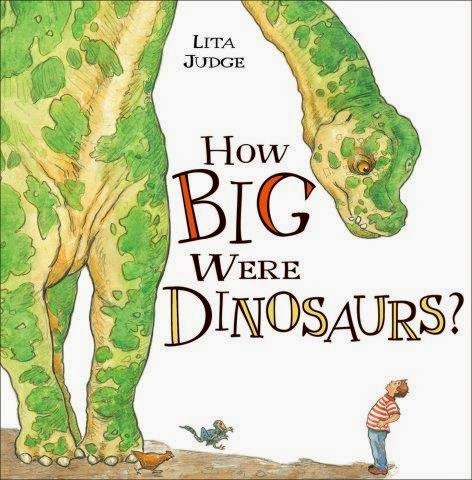 “Stalking, running, stomping, crushing. When we think of dinosaurs we think of huge monsters,” writes Lita Judge. “But how big were dinosaurs REALLY?”

Through text and illustrations, Judge puts dinosaur size into context. A Stegosaurus, she notes, weighed about as much as three cows. But those plates on his back made him look a lot bigger. And Microraptor? That little guys was no bigger than a chicken. Leaellynasaura was nearly as tall as your average Emperor penguin and Velociraptor was only the size of a dog. A large dog, mind you. One of the largest dinosaurs, Argentinosaurus, was as long as four school buses and weighed more than a herd of elephants – but most dinosaurs fell somewhat short of that.

What I like about this book: It’s fun. Judge uses size comparisons to relate cool facts about dinosaurs, and combines creative storytelling with her wonderful illustrations to share authentic information about these ancient reptiles. In her illustrations she places dinosaurs next to modern animals (and cars) to give some perspective on relative sizes, and provides a fold-out chart that compares dinosaurs to each other.

Judge knows her facts; she spent three summers as a teen, volunteering at dinosaur digs. But she also has fun with her illustrations, imbuing her dinos with great expressions and hints of personality. For example: Torosaurus, with a 10-foot skull, is not the sort of beast you could force into the veterinarian’s clinic.

Beyond the book: How big is big? Relative size is cool, but what does it look like on the ground? Create size comparisons with sidewalk chalk on the parking lot or sidewalk or wherever pavement can be found. Pace off the size of various dinos and draw a line from nose to tail. Use different colors of chalk. Then you can do your own comparisons: how many kids lying end-to-end? How many hopscotch courts? How many school buses can park on the hugest dino? How long does it take to run from one end to the other (you need a stopwatch). Can you toss a beanbag from nose to tail? How many leaping steps does it take? How many dinosaur lengths is it from your school door to the post office?

You can see out what other bloggers are reviewing over at the STEM Friday blog. Then amble over to Sally’s Bookshelf to check out If I Had a Raptor. Today's review is also part of PPBF (perfect picture book Friday), an event in which bloggers share great picture books at SusannaLeonard Hill's site. She keeps an ever-growing list of Perfect Picture Books. Review copy provided by publisher.