This week I'm digging into dinosaur books - here on Archimedes with nonfiction, and over on Sally's Bookshelf for a more imaginative take on dinos. Come back Friday for another book and some hands-on stuff to do. 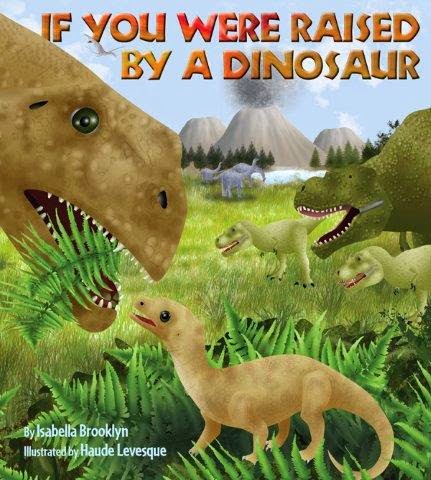 If You Were Raised by a Dinosaur
by Isabella Brooklyn; illustrated by Haude Levesque
80 pages; ages 6 & up
Imagine! Publishing, 2010

If you’re looking for something for older readers, this is a good resource – and it’s written and illustrated by people steeped in science. The first chapter introduces the science of paleontology and some insight into how scientists determine whether a dinosaur walked on two feet or four.

Chapter two poses a question: what came first, the dino or the egg? Of all the things scientists know, or surmise about dinosaurs, the one fact they all agree on is that dinosaurs hatched from eggs. And those eggs came in a range of sizes and shapes- some were a foot long and ten inches wide, others only an inch long. The next chapter asks whether dinosaurs were good parents. Some dinosaurs protected their young from predators; some brought food back to the next for their hatchlings. Parental care in dinosaurs is one of the “hot” topics these days, as scientists uncover evidence that babies had no teeth – so someone had to feed them. And Massopondylus babies started out walking on four legs before they eventually learned to walk on two.

One chapter focuses on T. rex, comparing skeletons of youngsters against adults. Turns out humans share some similarities with this Tyrannosaurus: the young of both species take about the same amount of time to mature from juveniles to adults, and hit a growth spurt near 12 years of age. The book ends with a chapter about the future of paleontology, a pronunciation guide, and a useful index.

Today it's Nonfiction Monday round-up. Head over to the Nonfiction Monday Blog to see what other folks are reading - and writing about. And check out a review of Tyrannosaurus Wrecks over at Sally's Bookshelf. Review copy provided by publisher.
Posted by Sue Heavenrich at 1:00 AM
Email ThisBlogThis!Share to TwitterShare to FacebookShare to Pinterest
Labels: dinosaurs, nonfiction monday