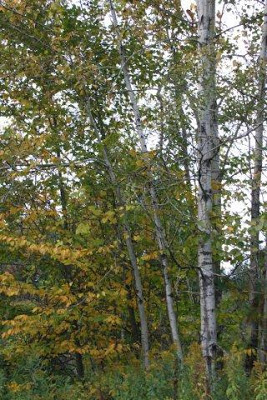 The other day I was out taking photos of leaves and I stopped to listen to the world around me. It’s pretty quiet on my hill, but there was a lot of rustling in the leaves – a breeze so subtle that I couldn’t feel it had the big toothed aspen leaves chattering like the ladies down at Rosie’s Café (an imaginary place that doesn’t exist in my town but should). I got to wondering how cool it would be if we could harness all the energy generated by the leaves flipping back and forth on their stems.

Some engineers had a similar idea. They were looking at problems with harvesting wind power in urban areas, where wind speeds are lower than needed for large turbines and where you wouldn’t want huge turbines anyway. One mechanical engineer experimented with an aerofoil that fluttered like a fish tail, generating small amounts of current each time it moved. Another team proposed a tree of flapping “leaves”.

Scientists at UC Davis are growing tiny “trees” of silver to collect solar energy. But you don’t have to be an engineer in a university lab to come up with a new idea. Thirteen-year old Aidan Dwyer devised a vertical array of solar cells to resemble the leaves that collect the sun’s energy. Because, as he pointed out, those natural “solar panels” aren’t all flat, like roof panels. In fact, they’re arranged around the trunk of a tree in a specific pattern: the Fibonacci sequence.

Aidan's project won the 2011 Young Naturalist award from the American Museum of Natural History in New York. Even though he made some rather serious errors in original calculations, the idea has merit. He's conducting a new set of experiments to see if he gets similar results (with corrected calculations).

Velcro was another nature-inspired idea that came from close observation of how burdocks clung to sweaters. What ideas does nature inspire in you? For more Friday science inspiration, head over to  STEM Friday.