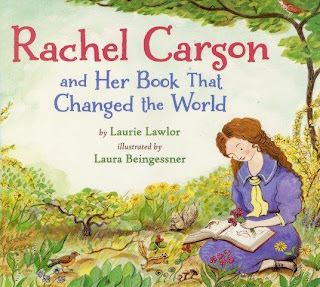 Rachel Carson and Her Book that Changed the World

By Laurie Lawlor; illustrated by Laura Beingessner
32 pages, for ages 7-10
Holiday House 2012
It just seems natural to kick of Earth Month with a book celebrating the life of Rachel Carson, founder of the environmental movement. Laurie Lawlor begins with Rachel’s early life: a young girl creeping upon a Yellowthroat’s nest to photograph the eggs. She follows Rachel to the Pennsylvania College for Women where, Lawlor writes, she’d rather study stuffed birds than attend parties.
After her first year at college, Rachel returned to her home where “…a putrid smell lingered everywhere. Smoke clouded the sky. Pollution floated on the river.” This was a turning point in Rachel’s life; after taking a biology class she decided to become a biologist.
Jobs were not easy to find during the Great Depression – even for a woman with a master’s degree in biology. Eventually Rachel got a job with the Bureau of Fisheries, and began writing about life in the sea. She explored coral reefs and tide pools. She cared for a young child. Concerned about the declining bird populations, she eventually took on the chemical industry and published Silent Spring, the book that helped launch a new environmental awareness.
“Why Rachel?” I asked. One of the reasons, said Lawlor, is that Rachel Carson pursued a career in science when women were clearly not welcome in the field. “When she began her work on Silent Spring, she knew just how daunting the task was before her. She was going up against the powerful chemical industry in the United States.” Lawlor noted that despite Rachel’s numerous family demands and her fight with breast cancer, she resolved to finish Silent Spring, no matter what.
Lawlor did tons of her own research to bring Rachel to life for children. She read Carson’s books and letters to her friends, watched film clips of her testimony before President Kennedy’s Science Advisory Committee, TV interviews and more. Add it all together and it took Lawlor about three years to research, write and edit her book.
The work Rachel began needs to continue, says Lawlor. “I think that an adequate supply of clean water is and will be one of the key issues here in the United States and around the world.” Lawlor has become involved in her own region with a group of citizens working to protect the Mukwonago River in southeastern Wisconsin.
“I think that all of us need to take a more active part in understanding, appreciating, and protecting water in lakes and rivers and oceans and ground water,” says Lawlor. “It’s a resource that is essential for all life: people, animals, and plants.” Indeed, she wrote about a rare wetland in This Tender Place.
“It’s essential that we all understand where we live,” says Lawlor. People need to become more active in planning hearings as well as taking personal actions, such as cleaning up trash and conserving water. “Sharing nature with children is an important first step. Just getting outside and enjoying the wonder of what’s here – wherever we live.”

Lawlor thinks of Rachel Carson when she hears the first Wood Thrush of spring. “Her work was really a wake-up call. I hope that young readers will be equally inspired to discover Carson and think about what they can do to help save the environment.”