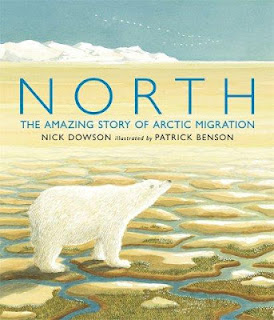 North: the Amazing Story of Arctic Migration
By Nick Dowson; illustrated by Patrick Benson
56 pages, for ages 7 and up
Candlewick Press, 2011
Few animals live in the Arctic year around: polar bears, musk oxen, arctic hares, arctic foxes. It’s a bleak, icy desert in the winter, but come spring, it fills with life. Every spring, millions of animals – more than 180 species – set off from around the world on a long journey north.
Nick Dowson’s poetic text and Patrick Benson’s luscious illustrations invite readers on a journey across great expanses. We watch the warming days, the algae growing beneath the polar ice, changing the color of the countryside. On land, plants creep up through melting snow.
Gray whales swim from Mexico, a 5,000 mile journey up the coast of California, Oregon, British Columbia. Terns have a longer journey, flying from Antarctica to the northern pole. White cranes migrate from China, caribou from Canada.
By summer, “all day and night, the sun spreads light, warming soil and water.” Tundra flowers bloom in a rainbow of colors, and the air hums with bees and mosquitoes. The illustrations are brighter, more crowded with life. By September the flow of traffic reverses as packs and herds and flocks follow their food and the sun south.
The writing is as spare as the tundra, the illustrations as expansive. Dowson saves geographic details and a discussion of climate change for the back pages. The Arctic isn’t a continent like Antarctica; it’s 5.4 million square miles covering thousands of islands and the northern parts of North America, Europe and Asia. And it’s endangered.

Global warming, notes Dowson, has caused the ice to melt. That threatens the survival of polar bears. The warming ocean threatens plankton – the major food source for birds and whales and fish. He allows readers to draw their own conclusions.