Another Good Book: For the Birds

For the Birds: the life of Roger Tory Peterson
Written by Peggy Thomas; illus. Laura Jacques
40 pages, for ages 8 & above
Calkins Creek, 2011 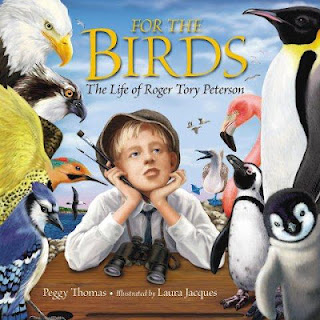 I knew I would love this book from the moment I opened the cover – immediately inside is a field description of a birder, complete with identifying markings, habitat and range notes and a clear description of its call. What a great way to introduce a biography of the guy who gave us the Peterson Guides.
If you’ve ever wanted to know what a bird or flower or tree or rock is, there’s a good chance you’ve grabbed a Peterson guidebook. The idea of organizing information so anyone can access it quickly – whether by flower color or the silhouette of a bird – that’s only one of Roger Tory Peterson’s gifts to us. He also helped develop a public conservation awareness that endures.
I asked author Peggy Thomas whose idea was it to start the book with a field entry for Roger T.
“Mine,” she said. “Peterson usually had an illustration of the topography of a bird in his field guides, and I loved the idea of turning that around so that it was the topography of a birder.  It really gives many of the facts about him in a tight little space.” She credits illustrator Laura Jacques for bringing her idea to life.
Thomas has always loved birds and remembers growing up with in a house where Peterson field guides lined the bookshelves. But it wasn’t until Peterson died that she realized he grew up in a towns just a couple hours from her home. Thomas was surprised to learn there were no children’s books about him, so she started digging around.
“I was particularly drawn to his sense of adventure and passion for birds when he was a child,” she said. “He recorded every bird he ever saw in a notebook, noting where he saw it, when he saw it and what the bird was doing.” As she writes in her book, these early notebooks grew into the first field guide for amateur bird watchers – and during wartime, when money for books was scarce.
“I like true stories of people who pursue their passions and succeed,” Thomas said. “I hope kids get a sense of that and feel they can do the same.”
Thomas did a lot of research, spending days at the Roger Tory Peterson Institute if Natural History in Jamestown, NY. She dug through boxes and boxes of archived materials, sometimes pulling out a bird sketch Roger made as a youngster. She read journal entries, letters he wrote to his family, and doodles in his biology notebook from school.
Thomas also got to see a study specimen of a flicker – the bird that inspired Peterson to spend his life with birds.
When I asked Thomas what cool new thing she learned while working on her book, I expected it to be a fact about birds. Instead, it was how Roger used his stylized black bird silhouette technique – the simple shapes that help people identify what group a bird belongs to –  for creating plane-spotting guides for Army in WWII.
“The plane silhouettes were printed in Life magazine for the public too,” Thomas said. “He had a much greater impact on American culture than I ever thought.”  Indeed – Thomas found a way to incorporate those iconic bird silhouettes in her book, too.