Today is an excuse to play with math. After all, it’s Pi day – or at least as close as our calendar can approximate it: 3/14.

That's because we don't have any dates that begin 3.14159265358979323846264 and just keep going and never end. That's what pi does. If you want to see the first million digits, go here.
Pi is a perfect number to contemplate on this blog because back in 250 BC my hero, Archimedes worked out that the value of pi is greater than 223/71 but less than 22/7. He did this by approximating the area of a circle using the area of a regular polygon inscribed within the circle and the area of a polygon within which the circle was circumscribed. He started with a hexagon and worked his way up to a 96-sided polygon, getting really close to the approximation of pi.
So – what do people do on Pi day? They make pies - all kinds: apple, cherry, blueberry or pepperoni, sausage, extra cheese. Or all of them.
They calculate pi. You can do this too - just grab a pie and measure its circumference (around the edge) in centimeters. Then divide that number by the diameter and you've got pie pi.

They might make pi-dyed T-shirts, speak pi-thon or scribble poetic lines of pi-ku. Like like haiku, it's composed with three lines: 5 syllables/ 7 syllables/ 5 syllables.
Preheat, roll the dough
Add sauce and cheese and garlic
Pi are round not square 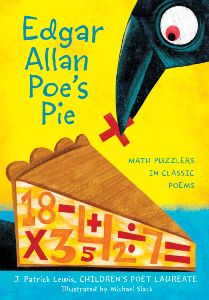 Speaking of Pie and Poetry, here’s a new book to check out. The first poem, “Edgar Allan Poe’s Apple Pie” wants to know how many cuts give 10 pieces. And though there is no pi for Poe, you might want to bake an extra pie to test your answers. Regardless of what the answer key says, you can indeed use four cuts for 10 pieces – if you don’t care about divvying up your pie equally.
The poems make you think about math outside the the pie tin. I particularly like “Robert Frosts’s Boxer Shorts”, inspired by “Stopping by Woods on a Snowy Evening” and “William Carlos Williams’s Pizza” which – like certain plums – was just too inviting to resist.
Edgar Allan Poe's Pie is by children’s poet laureate and pie-eater, J. Patrick Lewis,and illustrated by Michael Slack. It's got 14 poems, each a reimagined classic poem spiced up with math, and should be on bookstore shelves by beginning of April. Published by Houghton Mifflin Harcourt (review copy from publisher).
If you’re still up for a slice of pi - and who isn't - drop by Vi Hart’s video on why “Pi is (still) wrong”
To find out what pi sounds like, check this out.
Posted by Sue Heavenrich at 7:42 AM
Email ThisBlogThis!Share to TwitterShare to FacebookShare to Pinterest
Labels: book review, math, music, pi, Pi Day, pie, poetry