Museums are More Than Collections

What do you imagine when you hear the word "museum?" Walls covered with paintings? Dinosaur skeletons? Ancient agricultural implements?
Sure, museums are a repository of the stuff of our natural - and cultural - world. But they are way more that just places where researchers can examine collections.
Museums can inspire and exercise your creative mind. They are a place where you can learn something new. And they even provide opportunities for socializing. Not that you're going to engage strangers in conversation (though you can if you desire), but when you go with family and friends, a museum visit offers jumping off points for discussion. And, according to some research, going to a museum makes you happy.
At least it makes me happy because, let's just face it: museums are fun! Which is why, a couple weeks ago, I announced to all gathered at the breakfast table that we were headed up to the Museum of the Earth in Ithaca, New York. It's filled with fossils and all things paleontological - but right now, and through the end of the year, they are featuring a fantastic exhibit about insects. And you KNOW I just LOVE insects! 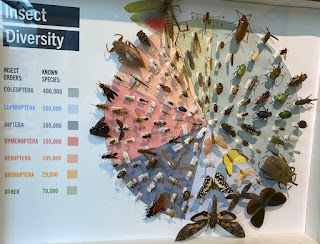 The cool thing about insects is that there are so many kinds of them. An amazing diversity of bugs from beetles to butterflies, wasps to walking sticks, and everything in between.

Not only is there great variation between species, but also within species. Take paper wasps, for example. Their size can vary depending on where they live. Their markings can vary, too - which is why they have learned to recognize individual faces. Cool, right? Check out this paper by Miller et.al. on cognition in Polistes fuscatus. Looking at the collection of pinned Polistes I could not tell them apart ... But I digress. 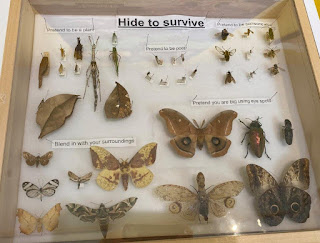 Then there is the diversity of adaptations to avoid being eaten. Some bugs disguise themselves as plant parts: twigs, thorns, leaves. Some use color to blend in with their surroundings, while others use design and color - such as eyespots - to frighten off potential predators.

Some bugs mimic scarier insects. Think of all those yellow-and-black flies and beetles that look like bees and wasps. Who wants to catch them!

And then there are the beetles and moths and caterpillars that pretend to be poop. Seriously - Best. Disguise. Ever! 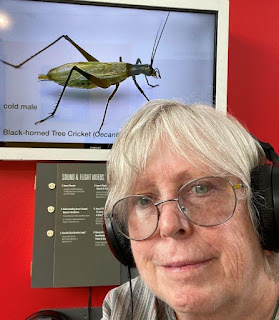 And then there are the hands-on things to do: videos to watch, recordings of insect sounds, specimens to examine under magnification, a kid's corner with mazes and coloring sheets and books to read ...

And this is just one small part of the museum! Yes, I could spend an hour just chilling with the bugs - but there are fossils to find, extinction events to explore, and a very cute blue-legged hermit crab climbing a chunk of coral in the salt water tank.

Did my morning at the museum inspire my creative mind? Absolutely.

Did I learn something new? Yes!

Did we talk about the exhibits later on? How could we not!

Six-Legged Science will be on display through December 2022. You can find out more about it at www.museumoftheearth.org/six-legged-science

You can find out more about the role of museum collections in biodiversity conservation at this post, www.priweb.org/blog-post/insects-under-threat-the-role-of-natural-history-collections-in-biodiversity-conservation

And you can probably find me checking out the insects in and around my garden this fall, at least until it gets too cold for them.

Posted by Sue Heavenrich at 1:30 AM
Email ThisBlogThis!Share to TwitterShare to FacebookShare to Pinterest
Labels: #MuseumoftheEarth, #SixLeggedScience, curiosity, diversity, insects