Explore Outdoors ~ An Earthball by my Porch

There's a small bit of old board laying in the grass next to my porch. I probably used it to level a flower pot a few years ago. Over the years moss and lichens began growing. 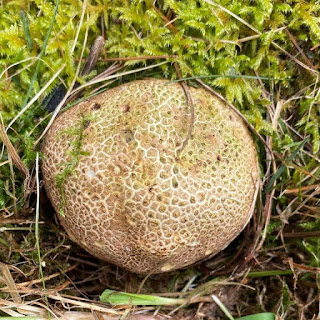 Then, mid-September, a very strange thing showed up.

Kind of tough and leathery-ish.

Nestled into the grass and moss like an egg. But with a tiny hole at the top.

I figured it was a fungus of some sort. But what?

Turns out it's an Earthball. Also called the Pigskin Poison Puffball. It doesn't have much of a stipe (stem) - just a tiny bit that connects it to the soil.

I decided to watch it for a couple weeks to see what happened. 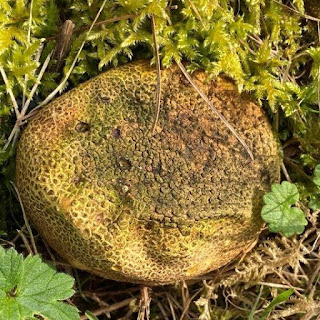 I checked on my Earthball every day for about... three days. Then I forgot. I'd charge out the door on my way to the garden, the library, the mailbox. And I'd say "oh, I'll take a good look at it when I get back."

Over the span of 20 days, the Earthball aged. It got scaly and looked a bit deflated. Nothing had eaten it - somehow I thought it might be nibbled by one of the chipmunks that hang out on the porch. But no, the animals left it alone. I guess nobody wants to partake of Pigskin Poison Puffball. 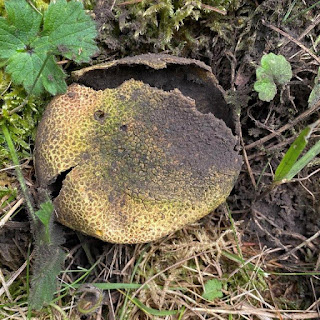 Three days later it had split, in an uneven tear. A dusting of black spores covered the moss and grass.

What sort of fungi are hanging around your porch?