It's a Bird! It's a Dinosaur! It's Chicken Frank!

I love dinosaurs - who doesn't! And I love chicken, especially when it's seasoned with .... I mean, I love the diversity of chickens and their personalities, and the cool way they chuckle and talk to each other. So of course I love this brand new out-in-the-world today book: 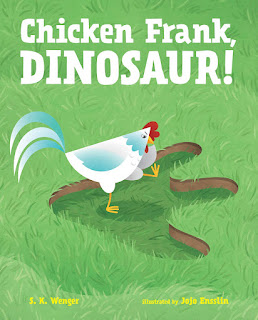 Chicken Frank, Dinosaur!
by S. K. Wenger; illus. by Jojo Ensslin
32 pages; ages 4-7
Albert Whitman & Company, 2021
theme: birds, dinosaurs, science
"What’s That?”
“A DNA test. To find another dinosaur, like me!”
Frank is not an ordinary chicken. He’s a chicken who knows his ancestors. And by ancestors, he means dinosaurs. More precisely, theropods – though Frank is pretty sure T. rex is one of his parent’s parent’s parent’s ….. parent. His evidence: three-toed feet, feathers that are modified scales, and an embryonic tail.
What I like about this book: It is told in dialog, accompanied by chicken-scratched diagrams in the dirt and the occasional ultrasound or chalkboard chart. While it is true that chickens don’t talk (or at least speak English) or lecture on evolution, this book is filled with facts, and it is very, very funny. Also, there is back matter ~ with a discussion of similarities between dinos and chickens as well as some frank facts about evolution and a glossary of Frank’s favorite animal groups (which includes Lepidosaurs! one of my faves, too!). 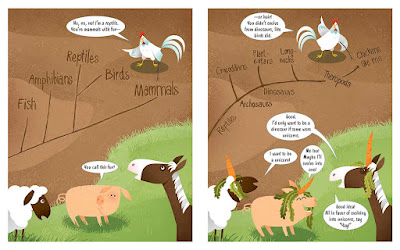 This book was SO much fun to read that I just had to ask the author, Shaunda Two Questions:
Me: You don’t describe evolution in the text, so our understanding of how birds are related to dinosaurs (and their kin) relies on illustrations. What sort of art notes did you include?
Shaunda: I included three art notes with the original manuscript, and they were very brief and hinted at images the illustrator might draw, like [uses hand lens] to help convey the scale of the content. I wanted the editor to have room to form her own images in her head, rather than try to insert my own ideas which would take her out of the flow of the story. I suspected the editor had a background in science (since she edited these types of books), so I trusted that and kept the art notes to a bare minimum. I wanted the editor to fall in love with the characters first. Any supporting content could be provided as needed. And it was—after the illustrator began his work and the editors began looking more closely at the text. Eventually, they asked for backmatter and a glossary.
Me: What challenges did you face writing a book entirely in dialogue?
Shaunda: It took a “hard push” in the form of a rejection letter from the publisher to get me to write Chicken Frank, Dinosaur! in dialogue. The original manuscript was conceived and drafted in traditional narrative prose with a character arc. However, the publisher wanted the story to move more quickly with snappy dialogue. Through the revise and resubmit process, inserting more dialogue and trimming the narrative with the editor’s guidance didn’t quite mesh with the publisher’s vision. In the end, the original manuscript was scrapped with a rejection.
I suppose sometimes we creatives need that kind of “hard push.” And it worked for me, because writing the straight dialogue happened in a 3-am wake-up call from my muse shortly thereafter. The dialogue-only draft was written by hand in speedy-fashion in an hour. After some feedback from my critique group, it was ready to go back to the same publisher (although it took me a few months to find courage to do this). But I really believed my new version was exactly what the publisher had been asking for, so I sent it for consideration since we had worked so hard on the original story together. The rest is wonderful history!
For dialogue-only stories, my advice is to write a solid story in narrative-form first. Shape up the character development, arc, and emotional layers with your critique partners. Then transform it into comic-book/graphic novel style. By this stage, you’ll know what definitely needs to be seen in the text and what can be supported by illustrations.
Shaunda is a member of #STEAMTeam2021. You can find out more about her at her website.
Beyond the Books:
Find similarities between a chicken and a dinosaur. Materials needed: a book (or books) showing dinosaurs, and a chicken. If you don’t have a chicken hanging around your house, a good photo will do. Look at their feet and their arms/wings. If you have chicken parts remaining from a meal, look at the bones. Are they hollow inside?
Learn more about how chickens are related to dinos. Here's one place to check out.
Make some dinosaur print cookies with Shaunda! Here’s a video showing how. If you don’t have a dino-foodpring cookie cutter, you can draw one on a cereal box. Then put it on the rolled out cookie dough and cut around the shape with a sharp knife.
Today we're joining Perfect Picture Book Friday, an event where bloggers share great picture books at Susanna Leonard Hill's website. Review ARC provided by the publisher.
Posted by Sue Heavenrich at 2:00 AM
Email ThisBlogThis!Share to TwitterShare to FacebookShare to Pinterest
Labels: #STEAMTeamBooks, author interview, birds, dinosaurs, evolution, humor