Explore Outdoors ~ Who is Hiding in the Bok Choy? 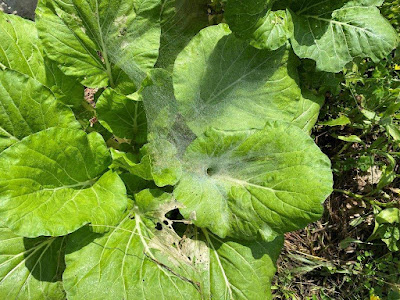 A couple weeks ago I was weeding the garden and I noticed a web across the top of the bok choy. A funnel web - you can see the opening of the web forming a funnel down the curvature of the leaf. The spider hides inside the funnel. When an insect lands on the web, the spider will run out and check to see if it's prey. If it is, the spider bites it and the fast-acting venom kills the insect within a couple seconds. Then the spider drags the prey down the funnel before eating. Not only does the funnel affords protection for the spider, but dining indoors prevents other insects from recognizing potential danger.

Funnel spiders are shy, so if you want to get a good look here's how: stand so that the sun is in front of you - you don't want your shadow to scare the spider; and look closely without touching the web. 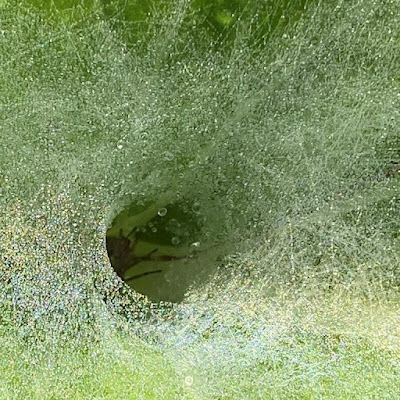 You can find out more about funnel web weavers here at the Bug Guide. You can find their webs on grass, along hedges, and in the garden. Do you have any in your neighborhood?

Posted by Sue Heavenrich at 1:00 AM
Email ThisBlogThis!Share to TwitterShare to FacebookShare to Pinterest
Labels: explore outdoors, observation, spiders, webs