Darwin's Rival: Alfred Russel Wallace and the Search for Evolution 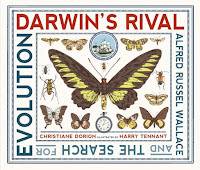 “In June 1858, the prominent scientist Charles Darwin received a letter from a young British explorer and naturalist… it proposed a new idea to explain how living things evolved over time.”

That young explorer’s name was Alfred Russel Wallace. Born at the dawn of the Industrial Revolution in what is now Wales, he worked as a surveyor. As he tramped around the hills he developed a keen interest in nature and science – and began collecting beetles. At that time some naturalists were proposing a daring idea: that living things gradually change over time.

Wallace wanted to learn more, so in 1848 he boarded a cargo ship bound for Brazil and spent the next four years exploring and mapping a river, collecting fish and birds and insects.

This is the tale of exploration, field research, shipwrecks, and a friendship between two naturalists that evolved over time. Both Wallace and Darwin wrote about natural selection and the evolution of new species. It was Wallace’s letter that prompted Darwin to write his book, On the Origin of Species. Rather than competing against each other for credit, both tried hard to treat each other fairly – to the benefit of all.

What I like about this book: At its heart, it’s an adventure story. There are maps showing Wallace’s routes, spreads showing diversity of beetles and butterflies and birds, and some great historical perspectives.