The Apollo Missions for Kids 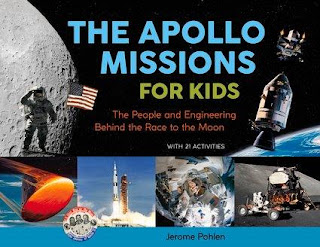 The Apollo Missions for Kids: The People and Engineering Behind the Race to the Moon, with 21 Activities
By Jerome Pohlen
160 pages; ages 9 and up
Chicago Review Press, 2019

This was the summer of SPACE – celebrating the historic spaceflight that landed the first two people on the moon (July 20, 1969). Getting people to the moon took money and man-power. It took teamwork! More than 400,000 people worked on the Apollo project, in factories and offices spread over 46 states, writes Jerome Pohlen.

Mostly, it took vision – the vision of President John F. Kennedy who, in 1961 declared the goal of landing a man on the moon within the span of a decade. At the time, the US space program was in its infancy; just 20 days earlier the first astronaut had been launched – a 15-minute flight up and back without even time to orbit the earth. Landing a human on the moon would be a challenge.

This book takes us into Mission Control and into space with the Gemini and Apollo projects. We get a close-up view of astronaut training, engineering problems, and the test of human endurance that early missions demanded. There were tragedies – the Apollo One crew was killed in a fire on the Launchpad during a test – and triumphs as the scientists, engineers, and astronauts worked toward their goal of safely landing on the moon and returning to Earth.

What I like about this book: The writing is engaging, like reading a story well told, and supported by plenty of sidebars. The book opens with a timeline that begins with 1926 – when Robert Goddard launched his first liquid-fueled rocket – to 1979 when Skylab fell to Earth. Sidebars provide additional details about the Saturn V rocket, how capsules “surf” through the atmosphere, moonsuit details, as well as offer short bios of software engineer Margaret Hamilton and “computer” Katherine Johnson (who calculated flight trajectories).

Twenty-one activities range from designing your own mission patch to figuring out your moon-weight, orbital mechanics, making “space food”, and more.

Check out NASA’s page on the Apollo missions here.

Today we're joining other book bloggers over at STEM Friday, where you can discover other cool STEM books. And on Monday we’ll be hanging out at Marvelous Middle Grade Monday with other  bloggers. It's over at Greg Pattridge's blog, Always in the Middle, so hop over to see what other people are reading.
Review copy provided by the publisher.